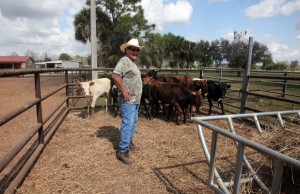 BIG CYPRESS — Team roping is a popular rodeo sport. Roping cattle by the horns is the cowboy’s job; raising cattle with the best horns for the sport is Moses Jumper Jr.’s job.

As a fourth-generation cattleman, Jumper has cattle in his blood. His company J-Cross Roping Cattle LLC raises small Corriente cattle and provides them to rodeos, arenas and local cowboys.

Jumper, who has always been involved in rodeos, started the business in 1984 with four or five cows because the rodeo needed cattle to rope.

“I leased the cattle to local cowboys so they could practice their roping skills,” said Jumper, of Big Cypress. “We had a little arena where the airport was, but when it was torn down I built one at my home. People came to rope cattle and have cookouts. It brought the community together.”

That small group of cattle grew to about 150 head at its peak; today, J-Cross has about 80 head plus calves. Over the years, Jumper sold cows and leased new bulls to ensure a large gene pool within the herd. As the herd grew larger, he needed more space. People let him use their land, which he fixed up and fenced to keep the herd together.

Jumper’s interest in the cattle is from a historical perspective and for their practical use.

Corriente cattle, also known as scrub or cracker cattle, came to Florida with the Spanish explorers in the late 15th century. By the 1700s, local Native Americans – who eventually became the Seminole Tribe – had herds with hundreds of head, which they traded with Cuba. The small, hardy cattle were well-suited for harsh Florida conditions.

Corriente are small, agile and athletic animals with great stamina, heavy horns and a gentle disposition.

“The cracker cattle are built for roping,” Jumper said. “It’s all about the horns; they have a good base for the horns. They aren’t raised for beef. They are a recreational animal used in rodeos because of their size.”

Both steers and heifers are used in rodeos. Their ideal weight is 400-500 pounds, which they reach at about 1 to 3 years of age. The horns are about 6 to 8 inches each. When the cattle get too large, about 600-700 pounds, horses cannot pull them and they cannot be used in the rodeo anymore. At that point, Jumper takes the cattle to market.

In addition to rodeo cattle, Jumper raises cracker horses from the original Spanish bloodline, brought to Florida in the 1500s. Jumper said the horses, known for agility and speed, helped the Tribe evade the U.S. military during the Seminole Wars.

“They are a smaller horse and could go through the swamp easily,” he said. “They are small-footed, don’t eat much and have a lot of stamina. The U.S. troops had large horses that couldn’t keep up.”

Jumper’s own history is rich with cattlemen and women. His mother, the Tribe’s first female leader, Betty Mae Jumper, was from Indiantown, where her family raised cattle.

“That village was Snake Clan and mostly women,” Jumper said. “They all raised cattle.”

J-Cross doesn’t advertise; the business thrives through word of mouth. Jumper believes he is the only Corriente breeder this far south in the United States. The biggest challenge of the business is finding enough land to raise the cattle. He said he currently has a couple hundred acres of scrub land.

“These cattle are very hardy. They will eat anything, more than a beef cow will eat,” Jumper said. “Mine have adapted to the environment very well.”

Jumper also raises Brangus beef cattle, a breed developed to combine the superior traits of Angus and Brahman, but not as part of J-Cross – the Corriente and Brangus are not allowed to cross-breed. His sons are involved in both ventures: Naha Jumper, of Brighton, owns half the Brangus herd, currently about 150 head. Josh Jumper, of Big Cypress, is a rodeo roper himself and owns half the J-Cross Corriente herd.

“Josh spreads the word around the cowboy areas,” Moses Jumper said. “He does more selling than I do.”

Jumper believes anyone can succeed in business if they are committed.

“You have to enjoy what you are doing,” he said. “I started small and kept growing. For me, it’s a labor of love. I love the cattle.”