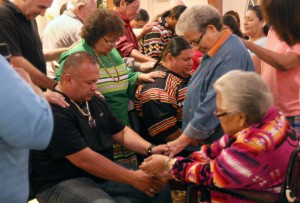 IMMOKALEE — Chaplain Dan Harris, of the Seminole Police and Fire departments, prepared a guest for what was about to happen at the Seminole Tribe of Florida’s 14th Intercessory Prayer Gathering.

Pastors and ministers from eight churches Tribalwide, congregants, friends and family members turned out at the annual spiritual rally to pray for Tribal youth and leaders.

“We really need prayer in this day and time. And with prayer we need unity. We must be together and be strong,” the Rev. Hummingbird said before introducing the first of many musical offerings.

Jonah Frank Cypress, of Big Cypress, kicked off the night of song-filled prayer with a rousing acoustic rendition of “Worthy is the Lamb,” followed by the sweet sounds of “Amazing Grace.” Members of Immokalee First Baptist Church choir, dubbed the Screaming Eagles, led congregants in the next several songs that included the soulful “Emmanuel.”

First Indian Baptist Church of Brighton, with Pastor Matthew Tiger, performed “Day by Day,” then mesmerized the assembly by singing another hymn in Creek.

“It means, no matter what comes and what will happen, we will continue on,” Pastor Tiger said.

Pastor Leadingfox, who came to serve the Seminole Tribe just 18 months ago, said the annual service was established in 2000 by then-Chairman Mitchell Cypress and Pastor Emeritus Wonder Johns, of the Brighton congregation.

“They got together because they did not like the direction that the Tribe’s young people were going. On a weekly basis, they were burying young people who should not have died for another 50 or so years,” Pastor Leadingfox said. “Prayer is the best ammunition we have. We use it to pray for the future of our youth and for our adult leaders, that they meet their responsibility.”

President Tony Sanchez Jr. and his brother, Immokalee Council Liaison Ralph Sanchez, joined Councilman Tiger before the altar where the assembly gathered around them, laying their hands upon them and praying for them.

President Sanchez said he was humbled by the experience. He said it reminded him again that he owes his service to elders who helped raise him since he was “knee-high to a grasshopper,” and to all Tribal members.

“It touched my heart,” President Sanchez said. “We’re human like everyone else so we need support when we are out there putting our lives aside. I was fortunate to be elected to do this job but not because I’m into titles – because it’s my time to give back.”

Pastor Hummingbird reminded the congregation that without God, the path of the leadership could be harder than necessary.