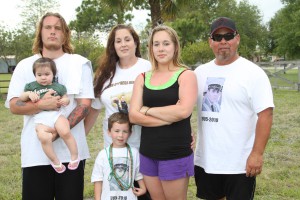 BIG CYPRESS — Fourteen teams took to the waters in search of the biggest catch. Amidst the friendly competition, camaraderie and family bonding surfaced.

It was the third annual Tyler Cypress Memorial Fishing Tournament on March 10 at the Big Cypress L-28 canal. Tribal citizens, community members and employees cast their poles; many participants entered with their families.

The tournament commemorated the late Tyler Cypress, who passed on in March 2010. Tyler’s favorite hobbies included fishing and spending time with his family.

Ryan Cypress, the late Tyler’s older brother, said the tournament was bittersweet. He enjoyed catching the tournament-high bass, which weighed in at 6 pounds, 1 ounce, but he wishes his younger brother could have been there, he said.

“I just think of all the time me and my brother used to fish out here in Big Cypress,” Ryan said. “We used to always compete against each other. One day, Tyler would win and the next day, I would win.

It went back and forth. I really miss those moments in my life.”

Ryan teamed up with his younger sister Caitlin Cypress and his parents, Charlie Cypress and his wife, Wendy Cypress, in this year’s fishing tournament. The Cypress family is from Big Cypress.

Fittingly, the Cypress family took home top honors this year; the weigh-in results revealed that they caught a total of 17 pounds, 1 ounce of fish, while tournament runners-up Jacob Cotton and Colton Irey caught 13 pounds and 6 ounces.

“It wasn’t even close,” Charlie said. “I think we did a good job out there.”

Big Cypress Tribal senior Moses “Bigg Shot” Jumper Jr., who was the only solo entrant in the field, chimed in on his observations of the tournament.

“It was, more or less, a time for everyone to come out to enjoy themselves,” he said. “Out of respect to those who knew Tyler, coming out here was a great thing. It was a good community project that promoted togetherness with the families who participated.”

“When Charlie lost his son, that was a sad moment for all of us,” Councilman Tiger said. “I’m very privileged to have somebody like him around. He and his kids have such big hearts, and they’re all well-mannered and disciplined. They are great fishermen, and they’re even better people. To keep Tyler’s memory going on like that is a blessing. My hat goes off to the whole family.”

Ryan said he was grateful to everyone who came out to participate in the tournament.