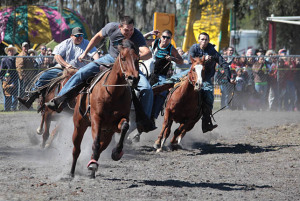 Field Day began in 1938 as an athletic competition between reservations, said Amos Tiger, Fred Smith Rodeo Arena director and a Field Day lead coordinator. Once the rodeo, food, and arts and crafts were added to the lineup, the event became a big festival.

Chairman James E. Billie said he remembers attending Field Day as a boy and is as impressed by it now as he was then.

“The competitions that took place were amazing to me as a 6 year old,” he said. “I remember Billy Bowlegs, he was in his 70s or 80s, yet he competed with young men in the broad jump. Today, the competition is in the rodeo.”

Members of the Florida State University marching band, joined by Osceola riding Renegade, once again made an appearance at Field Day, which is the only event where they appear outside FSU’s annual schedule.

“Whether you are an FSU fan or not their presence is moving, especially during the preshow of the rodeo,” said Lucy Bowers, a Field Day lead coordinator. “The band performs the national anthem and then the band brings in Renegade and Osceola with their war chant; your chest just fills with pride.”

The group of veterans formed in 2014 to bring recognition to Native American women in the military. They dress in traditional Native American clothing with military jackets.

“We are three lady veterans who came together to lead our people not in active duty but by giving back to our community,” said Brenda White Bull, U.S. Marine Corps 1989-2009. “Giving back to our people is our calling and we hope to give that back to you. We are all related.”

“This is a beautiful day with good music and good food,” Richard Osceola said.

Artist Bradley Cooley Jr. worked on a clay sculpture of Miss Florida Seminole Brianna Nunez for all to witness. Nunez sat patiently as Cooley worked out details on the piece, which will be molded and cast in bronze. The process takes about nine months.

“It’s always good to come out and visit,” said Big Cypress Board Rep. Joe Frank. “It enables me to kick back and enjoy the day.”

A horse race between Tribal members was held on the new race track east of the Fred Smith Rodeo Arena. Riders in western saddles rode like jockeys in silks as they strived to make it to the finish line first.

Categories included 17U boys, 17U girls, adult men, adult women and seniors. The winners of each race competed in a final match of the champions; Justin Gopher came in first, Nauthkee Henry took second and Jaylen Baker nabbed third.

“There is a lot that goes on all day every day,” Bowers said. “That has always been our goal, to keep you busy during your stay. When you walk out of the gates we hope that you can say you had the ultimate entertainment experience and will want to come back for more.”