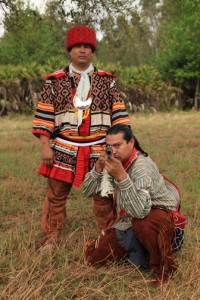 BIG CYPRESS — There is nothing like the pride that Seminoles get from reliving their victory.

The Big Cypress Shootout never fails to do just that. In its 15th year, the event continues to demonstrate what it was like for the Seminoles to go through a war that led to a costly, yet hard-earned triumph in preserving the Tribe’s independence.

From Feb. 24-26 at Billie Swamp Safari, the Shootout offered the public a peak into the past with a re-enactment of The Second Seminole War that featured authentic weapons and war attire.

During the weekend, Tribal Liaison for Governor’s Council on Indian Affairs Stephen Bowers led the Seminole Tribe Honor Guard in the presentation of colors. Flags representing the United States, Seminole Tribe, State of Florida and POW/MIA were displayed.

Bowers, who fought as a U.S. military soldier in the Vietnam War, gave an account on the re-enactment of The Second Seminole War between the Seminoles and the U.S. military that took place from 1835-1842.

“It dramatizes what the actual battle would look like when we were defending our homeland,” Bowers said. “We looked at the U.S. soldiers as invaders coming into our territory in a hostile manner. The history books have it the other way around.”

The Seminoles, led by Abiaka – also known as Sam Jones – would go on to defeat the U.S. military in The Second Seminole War. The Seminoles operated in guerilla warfare to fend off the United States, Bowers said.

“Ordinarily, we would be fighting on foot,” Bowers said. “We would hit, shoot, duck back into the bushes and wait for another opportunity to attack.”

Bowers said he considers the victory a bittersweet moment in Seminole history; historians deem it the costliest Native American war in U.S. history.

“I’m happy, but we had to fight back the United States for our land,” Bowers said. “It’s like we won the battle, but we didn’t win the war at the same time. We’re unconquered Seminoles, but we were restricted to reservations.”

It’s unknown how many Seminoles were killed or wounded during the course of the seven-year conflict. It is known, however, that Jones refused to offer a truce, compromise or surrender signal to the U.S. military – a key component in how the Seminoles earned its official status as Indian Country’s only unconquered Native American Tribe in the U.S.

Bowers said he’s happy with the Tribe’s newfound prosperity, thanks, in great part, to his people’s victory in The Second Seminole War.

“As a Seminole, I could now go out and buy a house anywhere I want to today in these times,” Bowers said. “But [in the past], I would be restricted to my homeland on a reservation.”

Bowers also said he was happy to have fought in the Vietnam War for his country, despite the fact that, at one point, the Seminoles were at odds with the U.S. Government.

“I am glad we are victorious as a people,” Bowers said. “The United States is my country as well, and I would defend it to the death. It’s my duty to preserve our freedom and everything that’s connected with it.”

Feb. 24 served as the educational day of the three-day Shootout.

Tribal senior Moses Jumper Jr., who took part in the re-enactment, said he had the opportunity to speak with Tribal youth about the significance of The Second Seminole War.

“A lot of our kids don’t really know too much about our history,” Jumper said. “To actually see a portrayal of our battle is a wonderful thing for our kids to watch. It’s just a good time to get a chance to teach our kids about it. This is a very important part of our Seminole history, and I don’t think we should ever lose that.”

Buck, who spent time with Seminole students from Brighton’s Pemayetv Emahakv Charter School (PECS) and Big Cypress’ Ahfachkee School, said she gained an appreciation for how the Tribe’s ancestors battled to pave the way for her people.

“It’s exciting to see a piece of our history out here,” she said. “This is what makes us unconquered, and for the next generation to see that, words don’t even describe how I really feel about it.”

Buck also gave opening remarks at the re-enactment on Feb. 25.

“It’s a very big honor,” she said. “I know a lot of hearts and souls don’t even get to see something like this. It’s definitely been one of my pleasures to represent the Tribe in this capacity.”

“The more Tribal kids know about it, the more they’re able to learn about our history,” said Osceola, who has sold sweetgrass baskets for a couple years. “The re-enactment of the wars educates the kids because I think they get disconnected with all the modern technologies they have access to.”