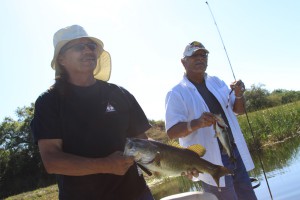 The tournament was held in memory of the late Tyler Cypress, who passed away in March 2010. Children and families came together in the spirit of fishing, one of Tyler’s favorite hobbies.

The Nelsons, who started fishing together in the late 1950s as youngsters in Miami, were competing in the tournament for the first time. They comprised one of 14 teams entered in the competition.They exuded happiness, confidence and gratitude as they started their boat engine at the Moses “Bigg Shot” Jumper Boating Dock.

Heading off into the Big Cypress L-28 canal waters at about 6:30 a.m., the Nelsons began their day toward the northernmost end of the waterway. Clouds and fog overtook the dark sky above.
The sun hadn’t even risen yet.

Nelsons get best catches early on

The water was quiet and serene, and the Tribal seniors could only hear birds and crickets chirping. The Nelson brothers tuned in to a country station on the radio as they sped up to 60 miles per hour on the canal.

“There’s no breeze out here,” Sam said to his brother, Ted, a few minutes before 7. “It’s hard for us to fish in conditions like that.”

As the Nelsons stopped just short of the canal bank’s northernmost end, Sam talked about their past success in the area.

“We caught some bass out here three, four months ago,” Sam said to Ted. “Let’s see if we could do it again today.”

After missing out on an opportunity to get the catch he wanted, Ted’s second try worked out.

At 7:11 a.m., the younger Nelson snatched a bass out of the canal waters.

Twenty minutes later, Sam caught another bass. But this time, it was too small. He chucked it back into the water. The cloudy skies began to give way to the sun, with cool temperatures and a slight passing drizzle.

Sam stayed focused. He caught an even bigger bass at 7:44 a.m., bringing the Nelson brothers’ total to three bass, just two short of the limit.

“We’re going to get bigger and bigger here,” Ted said to Sam.

At about 8 a.m., the Nelsons positioned their boat toward the middle of the canal, angling it to a prime position to catch more bass. The winds picked up some as well, which was welcoming news to the Nelsons.

At 8:31 a.m., Ted caught two bass within three minutes, with his brother, Sam, measuring one at 14 inches in length. They were feeling competitive.

The Nelsons caught two more small fish before grabbing a bass of their liking about 30 minutes later. At 9:27 a.m., Sam took out the fishing net and scooped the bass out of the water.

“Looks like a keeper,” Ted said.
After measuring the bass, the Nelsons were happy with their catch.

“We got our five fish we like out here,” Sam said. “Let’s go chase some more.”

The Nelson brothers continued on as the skies suddenly cleared and the temperature increased. By half past 9, the Nelsons decided they would move on to another location soon.

But not before they caught their biggest bass of the day at 9:51 a.m.

“We got a double hitter here,” Sam said.

“Holy smokes. I think we got the big one,” Ted said.

“We got what we’re looking for,” Sam said. “It takes an expert to net the one we got.”

Shortly after 10, the Nelsons started their engine again and took off.

They traveled about 12 miles down the canal, where they continued their seven-hour mission at the canal’s westernmost end – not far from the Billie Swamp Safari.

Nelsons push hard to the finish

The ride to the west end of the canal lasted for about 25 minutes, with a couple stops in between. On their way, the Nelsons talked briefly about the family bonding that went on during the tournament.

“Fishing is something that teaches you a lot of patience,” Ted said. “It’s good to see our kids learning about that.”

The Nelsons caught only small bass during the rest of their time out in the water. At a quarter after 11, with less than three hours before the weigh-in, Sam put his game face on.

“I’m tired of being Mr. Nice Guy,” Sam said to Ted. “Time to go back to being a rattler. Fishing ain’t about luck. It’s how you wiggle your worm.”

At five minutes to noon, a little more than two hours before the weigh-in, the Nelson brothers decided to move about 4 miles east.

They stopped at a fork point on the canal where they hoped to catch some more. After taking a short Gatorade break, they stopped about 500 feet south of the Eight Clans Bridge.

But the Nelsons, who consider Lake Okeechobee as their other fishing preference in South Florida, decided to go right back to the northernmost part of the canal, about 5 miles north of the Eight Clans Bridge.

When the Nelsons arrived to the place they started, they noticed a few competitors fishing there as well.

“Everybody’s down here now,” Ted said. “I think they missed the boat. The best time to catch fish on the north side of the canal is in the morning. That’s when we got all our fish. They were hungry early on.”

Shortly after 1, the Nelsons called it a day.

“The fish were probably feeding early by moonlight,” Ted said.

“I hope we got some good ones,” Sam said.

The Nelsons headed straight for the weigh-in.

The Nelsons’ fate was revealed shortly after the 2 p.m. cut-off time for weigh-ins.

At 12 pounds, 10 ounces, their five bass would place them third overall out of the 14 teams in competition. Tournament winners Charlie Cypress and family weighed in at 17 pounds, 1 ounce and runners-up Jacob Cotton and Colton Irey weighed in at 13 pounds, 6 ounces.

“It was a great time to relax out here,” Ted said. “We weren’t overcrowded with fishermen. That’s why we like to fish here, right on our land.”