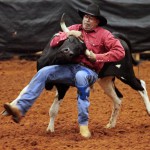 BIG CYPRESS — The Bill Osceola Memorial Rodeo in Big Cypress Feb. 8-9, the first event on the 2014 Eastern Indian Rodeo Association calendar, drew a crowd of competitive Native American cowboys and cowgirls. A sanctioned event, competitors accrued points toward their quest to compete in the Indian National Rodeo Finals in Las Vegas in November.

In its 26th year, the rodeo pays tribute to Bill Osceola, the Tribe’s first president, a preacher and a baseball coach. To commemorate the occasion, Moses Jumper presented a plaque to Osceola’s daughter Cynthia Osceola and brother Joe Osceola.

Raised in the Everglades near Tamiami Trail, Bill Osceola never attended school. He moved to the Hollywood Reservation, then known as Dania, in 1943, but he always kept a few hundred head of cattle in Big Cypress. He also organized a church in Hollywood and served as its preacher.

In 1956, Osceola built rodeo grounds on the Dania Reservation and held rodeos as a tourist attraction. According to historian Patsy West, 500 spectators attended the opening day event. The money earned from the rodeo paid travel expenses to Washington, D.C. to lobby the federal government for Tribal recognition. A constitutional committee formed in 1957 and Osceola was elected Chairman.

“Bill Osceola was the first to start a rodeo on the reservation in Hollywood,” Jumper said. “He put them on and it helped fund the effort to be recognized so we could incorporate as the Seminole Tribe of Florida. The rodeo has been part of our history ever since.”