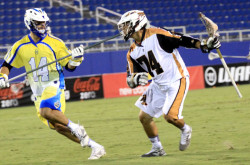 BOCA RATON — Growing up with three fellow lacrosse-playing siblings practically made Miles Thompson an expert in sharing. Equipment, headlines and even college lacrosse’s top individual honor have been shared in some manner in the Thompson household. Now, at 23 and in the infancy of his professional career, the Native American lacrosse star from upstate New York’s Onondaga Nation wants to share his recipe for success with youngsters.

“I feel that I can be a great influence on the younger kids and younger generations and help them out as much as I can,” Miles said after the Rochester Rattlers rookie attackman finished a morning practice at FAU Stadium June 20. He later faced the Florida Launch in his fourth Major League Lacrosse game.

Finding backs of lacrosse nets rather than bottoms of bottles is one bullet point on Miles’ resume for being a role model to kids on and off reservations.

“I’ve never touched drugs or alcohol,” said Miles, whose 82 goals as a senior for the University at Albany led the nation and matched the NCAA Division I record set in 1990. “Even my friends look up to me because I didn’t get caught up in that lifestyle. I don’t need to do drugs or alcohol to have fun; I can have fun without being messed up. That’s one thing I want to tell the kids.”

A sturdy will, imbedded beliefs and excelling at one of the most inherent sports among Natives have helped Miles avoid temptations.

“(The Creator) gave us this game for us to go out and give it our all and play with a clear state of mind, and to have fun,” he said. “There really is no secret when you work hard at what you believe.”

Miles’ clear state of mind is covered by dark hair that escapes from his helmet in a neatly braided ponytail that dangles between the 7 and 4 on the back of an orange, black and white Rochester Rattlers’ jersey.

“I’ve had it forever. It means a lot me,” Miles said. His father encouraged his brothers and him to grow out their hair as children and then gave them the option to cut it when they turned 18. None of the brothers opted to cut.

“Back in the days, everyone had long hair. We’re proud to say we’re Native Americans and we carry on the tradition,” Miles said.

The ponytail sways, but its owner doesn’t when it comes to remaining steadfast about staying away from alcohol and drugs. Miles said he’s had friends with enough talent to play Division I college lacrosse, hockey or basketball, but they didn’t make it that far.

“They chose that lifestyle to drink and do drugs,” he said. “That’s something on our reservation that is addicting. We do have a lot of people that fall that way.”

“He did that stuff. He got caught up in it for a couple years, but he’s 27 now and he’s been four years sober,” Miles said. “He experienced that, but he brought us back together as a family, and we’re together now and we learned from that.”

Miles’ story extends beyond resisting drinks and drugs. His ascension to becoming one of the most heralded college lacrosse players in the sport’s history emerged from meager surroundings.

A family who didn’t have power years ago eventually produced college lacrosse’s most powerful 1-2 scoring punch this season at Albany. While Miles cranked out the most goals in the country and finished second in points, younger brother Lyle smashed the NCAA record for most points in a season with 128.

In late May, their outstanding seasons were rewarded as they became the first Native Americans to win the Tewaaraton Award, college lacrosse’s highest honor that is given to its best player, or in this case, players.

The award, whose roots are Mohawk, was presented to the brothers at the Smithsonian Institution’s National Museum of the American Indian in Washington, D.C.

“A lot of people ask if we really wanted to split it, and we did. We don’t mind sharing,” Miles said.

Last month the brothers – Miles, Jeremy, Jerome and Lyle – and a cousin, Ty, who played at Albany, accounted for nearly a quarter of the Iroquois Nationals team in the FIL World Lacrosse Championships in Denver.

Their stories about learning to play lacrosse while growing up on reservations and thriving in the college and pro ranks have reached far beyond the Onondaga Nation borders. They’ve welcomed national exposure from The New York Times, ESPN, CBS News, Lacrosse Magazine, Inside Lacrosse and The Medicine Game documentary.

“I like it,” Miles said. “I’m not just saying it because I’m on big-time television or in big-time newspapers. The reason I like it is because we have a story that we want to get out there and we want to tell the kids.”

With Lyle being the last Thompson still in college, the brothers have decided to dive into the lacrosse camp industry. Miles arrived in Boca Raton from Maryland, where he attended a camp hosted by the newly formed Thompson Brothers Lacrosse.

“We’re trying to limit our camps to where we have more one-on-one time with everyone. We teach them what we know,” he said.

A sample of Facebook comments show the nationwide breadth of the brothers’ popularity with posters begging for camps to be held in Lake Tahoe, Austin, Minnesota and Maine, among others.

The Thompsons aim to grow the sport. Early stops for the camps also included California, Utah and New York. Miles said the brothers want to hold a camp this winter in Florida, where interest in lacrosse is on the rise, but far from matching its popularity in the Mid-Atlantic and Northeast. The goal to increase interest also includes reservations.

“We want to help spread the game,” Miles said. “That’s something we really want to do, give back to not only the Iroquois but other Native Americans. We’ve been doing research. We know out west there are reservations where there’s poverty and the death rate [is high]. We want to give back to our people.”

As for his game against the Florida Launch, Miles had a quiet night and limited playing time with just one assist in Rochester’s 18-13 win. However, his goal-scoring prowess hasn’t dissipated. In his first six games with Rochester, he had five goals. He made sure the ball from his first professional goal made it home to New York, where his father keeps such mementos.