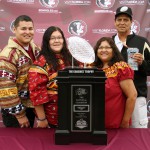 A party atmosphere prevailed as a highlight video of the BCS championship game played for fans, cheerleaders took to the field, the team gathered on stage and confetti burst through the air. Players, coaches, school administrators and the athletic director took their turns at the microphone to talk about the team’s journey to capturing FSU’s third championship as about 30,000 fans cheered from the stands.

Tribal member Kyle Doney had something much better than a front-row seat for the celebration; he sat on the dais as a representative of the FSU Alumni Association National Board of Directors.

“This was a once-in-a-lifetime experience,” said Doney, who graduated FSU in 2007. “They introduced me as the Seminole Tribe representative and an alumnus. I got a standing ovation. The coach also recognized the Tribe and their support; we got another standing ovation.”

About 40 Tribal members attended the celebration, many from Big Cypress.

He spoke about the team’s future and emphasized the school’s long-term football program that will lead to more championship titles.

Heisman Trophy winner and quarterback Jameis Winston, wide receiver Rashad Greene and athletic director Stan Wilcox also addressed the crowd from a stage on the field, but the star of the show was probably the Bowl Championship Series Waterford crystal football.

“The highlight was being able to hold the trophy,” said Doney, who attended most home games, several away games and the BCS championship game in Pasadena, Calif.

At the end of the event, fans were allowed on the field for a meet and greet with the players.