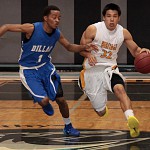 PLANTATION — The strong season of the American Heritage boys’ varsity basketball team brought them all the way to the Florida High School Athletic Association Class 5A state semifinal game Feb. 28, thanks in part to Hunter Osceola’s contributions on the court.

“I see Hunter as a big part of the team; we were lucky to get him this year,” said coach Charles Stephenson. “He plays shooting guard but he is capable of playing point guard.”

At the district playoff game against Dillard Feb. 7, the American Heritage team showed their determination by defeating their opponent by 1 point.

Despite a strong first half, American Heritage was down by 14 points in the second half. But in the last two minutes of the game, they turned it around and scored the winning basket with only seven seconds left on the clock.

“This was a big game; it’s win or go home,” said Marl Osceola, Hunter’s father. “It’s the best time of the year.”

Regardless of the outcome of the regional and state championship games, Hunter has proven he has what it takes to make a difference on the basketball court.