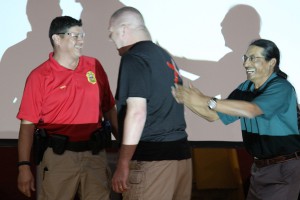 Chief Latchford offered Councilman Tiger the opportunity to Tase him to help raise funds to send the Tribe’s 60 Explorers to Washington, D.C. for National Police Week from May 13-17. The event also demonstrated the effects of a Taser.

“Anything you can donate is greatly appreciated,” Chief Latchford said to attendees. “It will allow our kids to enjoy a good education trip and come back to your community with more knowledge on what law enforcement is about.”

Tribal citizens and community members came out to witness the well-promoted occasion, held at the Herman L. Osceola Gymnasium during the Big Cypress Community Meeting. Many were curious to see their police chief get Tased by their Tribal leader.

“Take a good look at our police chief now,” Councilman Tiger said to the crowd. “He’s up right now, but he’ll be going down soon.”

Prior to the Taser demonstration, Seminole Police Department (SPD) Capt. Jim Polan hosted a 30-minute presentation on the responses to resistance that SPD officers often experience.

“We’re allowed to respond to an individual that’s trying to flee, resist arrest, harm someone else or harm an officer,” Capt. Polan said. “We’re allowed to do several things in order to protect ourselves and others.”

Capt. Polan described the varying degrees of fear that officers find themselves in when people resist them. Sometimes an officer’s presence or a verbal warning can de-escalate a scene, but other times police require more force to quell resistance.

“Depending on the level of the situation, we can use a reasonable level of force,” Capt. Polan said.

In addition to a Taser, officers can use pepper spray, a baton, a night stick and a less lethal gun, depending on the level of resistance they receive.

“Of all the tools we have, a Taser is one of the best we have available by far,” Capt. Polan said. “It is proven that it saves the lives of the offender and the officer.”

Officers typically are required to undergo extensive training and get Tased themselves in order to get certified to use the device.

Tasers transmit up to 50,000 volts of electricity into the body through a pair of wires that penetrates the skin. The jolt immobilizes the target, causing involuntary muscle contractions that often drop them to the floor.

Shortly after the presentation, SPD officers set up the Taser demo featuring the Police Chief and the Councilman.

Councilman Tiger’s use of the Taser on Chief Latchford sent the Chief into a brief state of shock, as SPD Officers David Billy and David Lee stood by his side to keep him from falling.

“A lot of tingling goes through your body,” Chief Latchford said. “It’s like taking a 9-volt battery and putting it on your tongue. But after 5 seconds, once it’s done, it’s done.”

Tribal citizens and community members gave a thunderous round of applause for the exciting demonstration.