Skip to content
You are here
Home > Community > Smallwood back in business: Developers pave Mamie Street 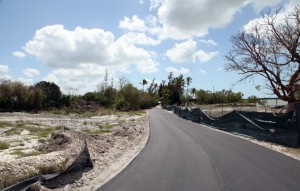 CHOKOLOSKEE — After missing three deadlines and twice being found in contempt of court, stubborn land developers Florida Georgia Grove LLC (FGG) have decided to comply with a September 2011 court order to restore and pave Mamie Street, the only road to historic Ted Smallwood’s Store and Museum for more than 70 years.

The developers had removed the southern 900 feet of the road, put up tall fences and blocked access to the waterfront Smallwood Store last April 14, after the Collier County attorney assured FGG that Mamie Street was part of FGG’s property.

“I can’t believe it. I’m watching them put it back, and I still don’t believe it,” said an astonished Lynn McMillin, executive director of the nonprofit trust that owns the iconic landmark. “I still can’t believe they don’t have something else up their sleeve.”

The fence was removed and the road re-graded in October, following an order by Judge Hugh Hayes, who found the road met “prescriptive easement” qualifications as a County road. FGG’s washed-out shell rock replacement “path,” however, proved impassable to most vehicles.

“Much of our business is tour buses, and I can’t tell you how many we have seen drive up and turn around and leave,” said McMillin, who stood by helpless as the 116-year-old wooden store’s finances disappeared. “All the money we saved and budgeted for repairs is gone to legal fees.”

Hayes had ordered the road put back “like it was” before its removal. FGG delayed the inevitable for months, pursuing several alternative schemes:

• FGG attempted to create a new access route through protected mangroves, but they were shot down by the U.S. Army Corps of Engineers.

• FGG and the County were unable to come to an agreement on a proposal that would move the road to another side of the property. Irritated by FGG’s brash move in taking out the road, County Commission Commissioner Jim Coletta made it clear that the Commission would not support any variances to enable FGG development on that site.

• FGG informally approached the Seminole Tribe, which declined any interest in purchasing the property.

It was Collier’s chief legal administrator, County attorney Steve Williams, who gave FGG the original, flawed information that Mamie Street was FGG’s own private road, since it transects FGG property on its way to the Smallwood Store. Williams’ misinformation was not enough to supersede the actual law, Hayes said, in declaring Mamie a County road.

Williams’ mistake, however, forms the backbone of FGG’s appeal to the Second District Court of Appeals. If that court finds in favor of FGG and knocks down Hayes’ original order, then FGG could take away the road again. FGG attorneys said it could be months before the Appeals Court decision comes down.

In one of the looney twists involved with this case, Hayes, the District’s senior judge, later recused himself from the case after FGG accused the veteran jurist of “bias” toward the County since the Collier County Courthouse Annex was named after him. His replacement, Judge Cynthia Pivacek also recused herself, without reason, two days after being assigned to the case.

The FGG property is contiguous to the Smallwood Store parcel and was purchased from the family by the Seminole Tribe of Florida in the 1980s.

Chairman James E. Billie had plans to renovate the old Blue Heron motel and create a park on the parcel in honor of pioneer shopkeeper Ted Smallwood, who befriended the Florida Indians and gave them credit and shelter after the end of The Seminole Wars.

The Tribe sold the property to FGG in 2004, however, while Chairman Billie was out of office. FGG tore down the Blue Heron and began work on a marina, hoping to “flip” the property to the County through a deal with the non-profit Trust For Public Lands – an opportunity that also never materialized.