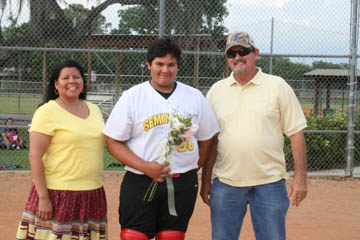 Lucas and Conner then presented their mothers with flowers to show their appreciation for making their baseball dreams possible.

Head coach Harry Tewksbury said parents support their children to ensure they keep up with school work and find a balance with extracurricular activities.

“They support the program and the school very well, so it is nice that we can do something to at least thank them for that to some degree,” he said.

Lucas, Conner and the rest of their teammates played their last game on their home field against Moore Haven and wrapped up the season April 9 in Clewiston. PECS could not boast a winning season but they found success in other ways.

“Win or lose, we were successful,” Tewksbury said. “We have been in some games and we have made some plays.”

PECS faced older and more experienced players on high school junior varsity teams. Tewksbury said that because PECS’ players were less experienced, the coaches worked with them to build up the fundamentals of baseball.

“They are very coachable, they listen well, they work hard, they want to learn; they are eager to learn when they come to practice,” he said.

While most middle school teams play on smaller baseball fields, PECS played on a standard high school-sized field. Tewksbury said he believes playing on the larger field at a younger age will give the players an edge when playing in high school. Next year Lucas will attend the Okeechobee Freshman Campus while Conner will head to Lake Placid. 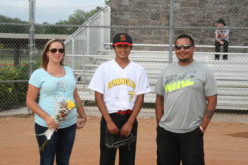 “Both of them … are just great kids; they are fun to be around, very respectful,” Tewksbury said.

A season full of determination, frustration and hard work paid off, not in wins, but in development and improvement, Tewksbury said.

“We practiced for almost a month before we played our first game,” Tewksbury said. “From that time to now, it is amazing how far they have come, and we really have not even scratched the surface.”