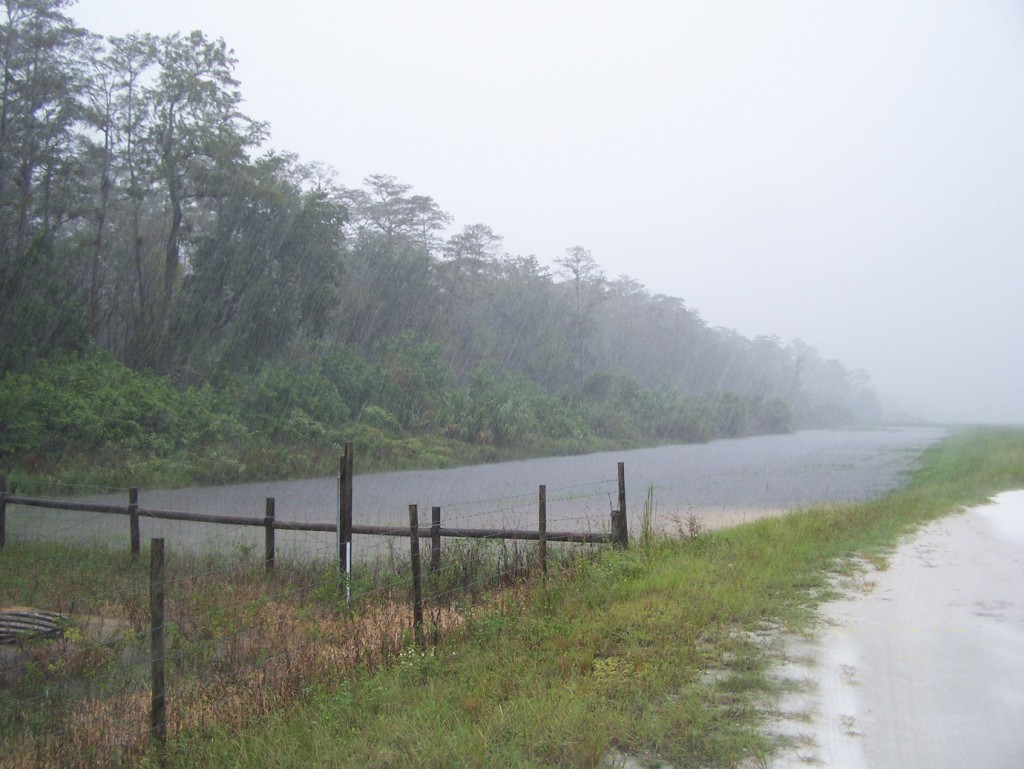 Even with the intricate system of canals built beginning in the 1840s, the lake and its water require close attention and management.

“When the lake goes up or down, it affects the Tribe the same as anyone else,” said Cherise Maples, acting director of the Environmental Resource Management Department. “We need a way to store water when it’s wet so when it’s dry the water is available.”

To help control water on Big Cypress, the Tribe partnered in 1996 with the Corps to improve 14,000 acres of swamp, hardwood hammocks, cypress sloughs, prairies and pine flat woods. Called a “critical project,” the Tribe built two storage basins and a 17-mile canal, which created the infrastructure to route water appropriately. Additionally, a much-needed third storage basin is about to be built.

“When there is extra water it goes to the basins, which are historic wetlands,” said Maples, noting the Tribe is responsible for the water leaving the reservation regardless of the quality of water flowing in. “The pollutants which come from the agricultural areas north of here, mostly phosphorus, settle out there before it’s pumped out to the canals. The water always leaves the reservation cleaner than it came in.”

Agriculture started around the lake because of the availability of water. Too much water, however, leads to flooded fields and ruined crops. Because of the periodic flooding, a barrier to the lake was built.

The 144-mile Herbert Hoover Dike around Lake Okeechobee has protected nearby communities since the 1930s. Vigilant monitoring by the Corps ensures the dike remains viable and structurally sound, regardless of the lake’s water level.

“The dike is 35 feet above sea level; our concern is not overtopping,” said John Campbell, public affairs specialist with the Army Corps of Engineers in Jacksonville. “It’s the additional pressure put on the dike from added water. Erosion, pressure and water seepage could lead to problems and a possible breach in the dike.”

The southeast quadrant of the lake has an area with an active seep. To prevent the worst from happening, once the lake level reached 15.5 feet, the Corps began weekly inspections, looking for any changes in the condition of the dike. If the water level reaches 16.5 feet, they will inspect the dike daily.

“Most of the issues we have with the dike are in the southern half of the lake,” Campbell said. “It was built in the 1930s, but we built on top of it in the 1940s and the 1950s. Methods used then aren’t the same we would use today. The dike is porous and not compacted well, which leads to the issues we have today.”

To mitigate the possibility of a catastrophe, the Corps has a stockpile of rocks and boulders nearby to use immediately in the event of a breach.

“We’ve never had a breach but we’ve had a lot of erosion and other issues that cause a lot of angst,” Campbell said. “Many of the issues developed in the 1990s and early 2000s when the lake was at the 17 to 19 foot range.”

The Corps is responsible for the water, dike and locks on the 730-square-mile lake. When the water level is too high, the Corps releases water down the Saint Lucie Canal to the Atlantic Ocean and the Caloosahatchee River to the Gulf of Mexico. Tropical Storm Dorian brought an abundance of rain in late July, so the Corps increased the discharge of water to manage the rising water level and continue to do so as necessary. Even with all the water releases, the level of Lake Okeechobee is still higher than average.

The water release, part of the Lake Okeechobee Regulation Schedule master plan for water management of the lake, is controversial because of the environmental impact it has on the estuaries of the Saint Lucie Canal in Stuart and the Caloosahatchee River in Fort Myers. The fresh water from the lake decreases the salinity of the water in the estuaries, which in turn affects the ecosystem.

According to the water control operations bureau of the SFWMD, the salinity condition in the Saint Lucie estuary is poor, which creates an adverse effect on the adult eastern oyster. The SFWMD, a state agency that oversees the water resources from Orlando to the Keys, provides the Corps with a weekly ecological report. The SFWMD strives to manage and protect water resources, as well as cleanup and restore the Everglades.

To help mitigate the environmental impact of the water releases, SFWMD has worked with various agencies, environmental organizations, ranchers and researchers to store excess water on private and public lands since 2005. The Dispersed Water Management Program encourages land owners to retain water on their land as a tool to reduce the amount of water discharged into the coastal estuaries. The Tribe is not involved in the program, but stores as much water as possible in the basins on Big Cypress.

“We are storing water in every nook and cranny we can find,” said Gabe Margasak, SFWMD spokesperson. “We are actively searching for land. The ground is saturated and there is just nowhere to store the water.”

SFWMD currently has 131,500 acre-feet of water, which amounts to one foot of water on one acre of land, on which they store water. The storage is located on 37 sites, of which 72,000 acre-feet are in regional public facilities, reservoirs, storm water and Everglades restoration areas and 61,500 acre-feet are on private land. The program started with eight projects; today more than 100 land owners participate. The storage basins on Big Cypress can hold about 4,450 acre-feet in basin 1 and 1,339 acre-feet in basin 4.

The historically wet summer has created ponding and flooding in Brighton as well, specifically in the recently developed Harney Pond Road area. Extreme rain allowed the Environmental Resource Management Department to see the result of the drainage system and where improvements can be made.

“Public safety is our first concern and secondly the drainage,” Maples said. “It helped us identify areas we need to focus on, especially the Harney Pond Road corridor, which is something of a bowl as far as drainage goes. The data we gathered from this rainfall season will help us be that much more successful in the master drainage plan.”

Ponding and flooding is less of a problem on Big Cypress because the soil drains faster and the canals are bigger, allowing the department to move more water faster. The southwest corner of the reservation is the native area where the water flows in a sheet into Big Cypress National Preserve.

“It’s hard to predict how drainage will act, but having a rainy season like this helps us identify areas that need better capacity so you can make right what might have been done wrong in the past,” Maples said. “The system is in place and working. We didn’t record any major damages.”