Skip to content
You are here
Home > Community > Princesses crowned 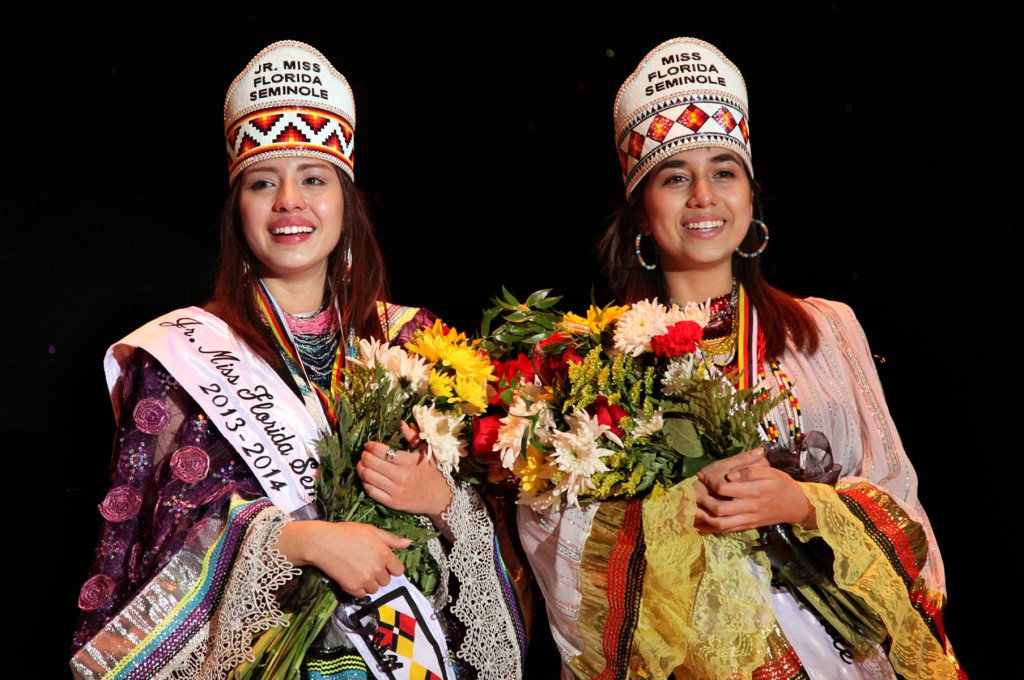 HOLLYWOOD — Brains, beauty, a flair for Seminole fashion and a gift for intelligent gab was all it took for two Hollywood sisters to take both crowns in the 2013 Miss Florida Seminole Princess Pageant.

The daughters of France Blais-Billie and the late July Billie, of the Otter Clan, are the only sisters to serve simultaneously since the pageant began more than five decades ago.

Brianna, a junior at Pine Crest School, was first to walk across the stage at Tribal Headquarters as new royalty. She was crowned and sashed by outgoing Jr. Miss Florida Seminole Brianna Nunez.

“I was thinking it would be crazy and cool if both of us won, but when they actually called (Tia’s) name I just started crying. I am so proud of her,” Brianna said.

Tia’s eyes also welled with happy tears as she was decked in pageant regalia by outgoing Miss Florida Seminole Alexis Aguilar. The senior at Pine Crest School said she looks forward to representing the Seminole Tribe throughout her one-year reign.

“I want to educate people outside of the Tribe about how the Tribe works,” Tia said. “I want them to know that we have our own government and that we function as a modern society.”

“Not all Native people are as blessed as we are,” she said.

Brianna said she wants to take her crown to Disney World – but not for fun. She wants to enlighten the corporation about Native American stereotypes that are perpetuated at the resort.

Wanda Bowers, chairwoman of the pageant and Miss Florida Seminole 1968 and 1969, said pageant winners get plenty of opportunities for the “very serious matter” of representing the Tribe. The girls will be the face and voice of the Tribe at events nationwide and perhaps, in foreign countries.

“In our matriarchy, being a woman does not mean you stand in the background. She’ll be ready to stand up and speak up to answer any question in the Tribal realm,” Bowers said.

“The more they get out there, the more they learn, become known and earn respect,” said Wilson, who serves with 10 other former princesses on the pageant committee.

Since holding princess titles, Wilson has been the Policy and Information Development Specialist for United South & Eastern Tribes Inc.,  managed an Elvis impersonator in Nashville, revamped the Alligator Times into The Seminole Tribune, contributed to the foundation of  Seminole Media Productions, started the Seminole Police Explorers program and fostered 13 children – among other things.

“This year, all of the young women in the pageant made up a very dynamic group. It didn’t matter who won because every one of them could do the job and do it well,” Wilson said.

Grant Gravitt Jr., executive producer and director of the Miss Florida USA Pageant, has attended the Seminole pageant for decades as a guest and friend of the Tribe.

“What Wanda Bowers and the entire committee do for the pageant is a gift of love to the Tribe,” Gravitt said. “Every year it gives me goose bumps to see the girls grow into young women and take over the family legacy.”

For Connie Gowen, the first Miss Florida Seminole who was appointed with the crown in 1957 by Tribal Council, being the official “backstage grandma” to countless contestants has been a blessing and honor. Sprite and cheery, Gowen arrives prepared with makeup mirrors, hair pins and last-minute sewing supplies. A Tribal elder now, Gowen is best known in the Tribe for making sweetgrass baskets, Seminole dolls and patchwork jackets.

“I’m still doing what I learned as a girl and now want the young people to carry on the language and culture to their children,” she said. “Every year we can’t lose because they all try their best to learn all they can. They are all winners.”