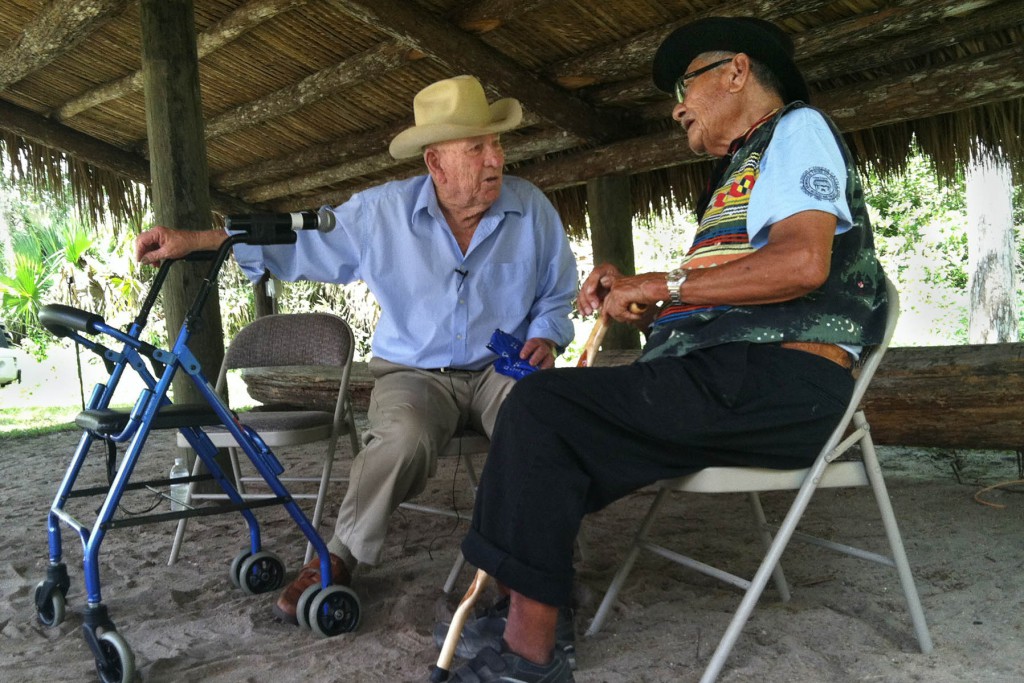 BIG CYPRESS — Neal Brown, 81, rested in a chickee on a scorching hot July morning and gave the Tribal Historic Preservation Office (THPO) and guests at Ah-Tah-Thi-Ki Museum’s Seminole Village an insider’s take on the first white man to trade with and live among the Seminoles in Big Cypress – his grandfather William Henry Brown.

“Most times we are out in the field and digging up history. We rarely have the real people right here,” said Maureen Mahoney, a THPO archeologist who helped organize the event.

Among 35 captivated listeners for the peek to the past were five generations of Brown offspring who traveled from Tennessee, Alabama, North Carolina and throughout Central Florida where William Henry Brown, originally from England, settled in 1885.

Brown owned Brown’s Trading Post and Boat Landing, at the head of the canoe trail on Big Cypress, where he traded alligator skins, otter hides and bird plumes with Seminole hunters. He also sold sugar, flour, grits, glass beads, fabric and other goods there and at a small grocery in present day Immokalee.

Born in Fort Myers and raised in the woods, Neal Brown said he did not know for many years that his family was different from the people who lived there first. His father, Frank Brown, was a close friend of Josie Billie and spent many days hunting in the woods with Josie and his father, Billie Conapatchee, who taught Frank how to speak Mikasuki.

“I reckon Josie Billie’s daddy took my daddy in. He was more Indian than white; he even thought like an Indian,” Neal Brown said.

Once, when Frank Brown, who had become a cattleman, and an elder Seminole went to a cattle auction, Neal Brown’s mother stayed with the elder’s family as a sort of deposit until the two returned home. But Frank Brown’s relationship with the Tribe was not all business. The Brown family was held in high regard – enough to be invited to Corn Dance and for Tribal families to camp at the Brown’s for Christmas holidays.

The Brown family lived part time in Immokalee and part time at the trading post, depending on the dry and wet season.

Under the chickee, Big Cypress elder George Billie, who works at the Museum’s cultural village, shook hands with Neal Brown and sat down to reminisce about days long gone. Though the two do not recall ever meeting, they shared stories about Charlie and Junior Cypress and Henry Billie (George Billie’s brother.) They laughed about the antics of some community characters and wondered what happened to a few more. They recalled the hardships and the simple life.

“I like all men. That’s why I wear a cowboy hat,” George Billie said.

Soon, everyone piled into cars and trucks to make the drive to the site on Big Cypress where the trading post and boat landing stood made of wood that William Henry Brown lugged himself from Fort Myers.

Stone and wood posts, put there in 1943 and now flagged with green plastic fence about 3 miles southwest of Junior Cypress Rodeo Arena on Josie Billie Highway, marked the spot.

There, they walked the nearly 1.5-acre area, posed for photographs and Neal Brown turned a 1947 map over to Mahoney, clearly illustrating significant landmarks throughout Broward, Palm Beach, Collier and Martin counties.

Mahoney said surveys and excavations of the area unearthed enough evidence to indicate that where they stepped was surely where patriarch William Henry Brown, his children and grandchildren walked through the last century and more.

Willie Johns, an outreach specialist at Ah-Tah-Thi-Ki, said the Brown family descendants were “lucky” to be able to experience the land – and swamp – where their forefathers made friends and flourished.

“Not many families can trace the path to where grandma and grandpa made a living in such a hostile environment,” Johns said.

Neal Brown said the land was underwater for nine months of the year and full of mosquitoes. Ox driven carts and walking were the only ways to travel the land, even along the “dry weather route.” The water teamed with alligators and the woods were full of parakeets and wolves.

For a while Neal Brown and his 12 siblings also lived on 10 acres of fenced-off government land in a wood building that sat on blocks. His father was hired to convince Seminole families to live on the land but Neal Brown said they refused.

“They believed they might be captured and sent to Oklahoma. They (Seminole) lived scattered out in the hammocks,” he said.

The house was blown away one year in a storm and was never rebuilt.

Neal Brown put his childhood adventures to good use. He worked cattle ranches for 42 years and hunted alligators for skins that he traded for extra money. One year he was short $600 to send his son to college. He killed enough gator to send him off with $950.

Naples resident Pam Brown, great-granddaughter of William Henry Brown, said she also continued the family tradition, sort of. She became a community leader, who last year ran for State Representative District 80, and a caterer who canned her family’s recipes and sold the goods at farmers markets in downtown Naples. Among her favorites is swamp cabbage chow chow.

Another great-granddaughter, Beth Brown Suggs works for the Tribe’s Accounts Payable Department in Brighton. She mentioned the connection during a conversation with Willie Johns in early 2011.

“It came up. I said my grandfather (Frank Brown) was friends with Josie Billie and that was that,” she said.

For Neal Brown it was about reliving the old days. He spoke of childhood memories when his grandfather  could out trail a dog and young men created their own recreation with “wrastling” each other and hunting. He remembered how trusted his grandfather and father were among the Seminoles because they were men of their word. One time, after two white boys were arrested for stealing hogs, Frank Brown testified at their trial, in favor of the Seminole farmer, and the boys served five years building Route 27.

Life was never easy but William Henry Brown set a path to the future with a simple gesture that is told from generation to generation. On day one, he pulled into a Seminole camp, said something in Mikasuki to an elder, the elder smiled and the rest is history.

“(The Browns) wanted their life here but they did not know the Indian way, not really,” Johns said. “They had to embrace that first.”