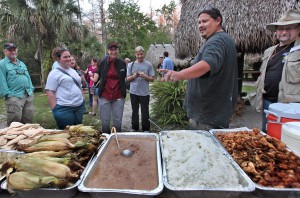 BIG CYPRESS — When the Army Corps of Engineers comes calling, the mission is often about building roads and bridges.

Recently, during a four-day stay at Big Cypress Reservation, 27 members of the Corps worked to build respect and understanding with the Seminole Tribe of Florida.

“Understanding the importance of relationships is the bedrock of everything we do. We have lawyers to keep us in compliance, but it’s no good if you can’t communicate and be harmonious with the people in the room,” said Jacksonville District Commander Col. Alan Dodd.

Corps members, from New England to California, from various professions like forestry, biology and environmental law, were immersed in Seminole culture – even sleeping in chickees and dining on campfire-cooked frog legs, deer, gator, lapale and swamp cabbage.

Georgeie Reynolds, a retired Tribal liaison for the Corps who attended as a consultant, said the experience was the 19th of biannual training opportunities through the Native American Perspective on Corps Projects program.

“We want to learn how (Native Americans) see the landscape. How they are tied more closely to the land – to be taught by them and learn from them,” Reynolds said.

The Corps is engaged in the Seminole Big Cypress Reservation Water Conservation Plan, a decade-long effort to improve 1,681 acres of swamp, hardwood hammocks, cypress sloughs, prairies and pine flatwoods; to provide water treatment for agricultural runoff; to reduce exotic plant infestation; to prevent flooding; and to make the most of the naturally wet season.

The project is within a larger $60-million, 14,000-acre hydration effort that encompasses also the Big Cypress Preserve and the Everglades Protection Area.

“It’s easy for people to formulate opinions about each other but it’s better to form relationships,” Tommie said during a meeting to explain the Tribe’s government and corporate structure.

The group also toured the Ah-Tah-Thi-Ki Museum for a history lesson that spanned the Seminole Wars to today’s Tribal influence on modern music. Storytelling around a campfire by Tribal members Everett Osceola and Ollie Wareham, followed by a pitch-dark swamp buggy excursion through the wildlife preserve, revealed the Tribe’s oneness with the land and deep spiritual beliefs.

Thuy Dao, born in Vietnam and raised in Kansas before becoming an environmental lawyer for regulatory, planning and project issues, said she knew nothing about Seminoles before the trip.

“It makes me understand more that our way is not the only way and not always the best way. Before contracts and negotiations, we should get to know the people,” Dao said.

A mile-long trek across the Museum’s boardwalk with Cultural Outreach specialist Reinaldo Becerra introduced wild native birds and plants used for food and medicine. Three generations of Tribal members, Quenton Cypress, Everett Osceola and Willie Johns, later hosted a question-and-answer period that gave insight about the present, past and future of the Tribe.

Johns said he watched the Tribe go “from rags to riches” and it feels good. But he called out the U.S. government and the Corps, which does the bidding of Congress, for causing Florida’s water problems – especially in the Everglades.

“Someone’s head needs to roll when you hurt our environment. It’s our livelihood, our culture. If we lose our trees we’d be like living in Oklahoma and we do not want that. We can’t live like that,” Johns said.

Lance Pool, a park ranger from California’s Lake Sonoma, said exposure to the Tribe enhanced what he had previously learned in college Native American studies classes. Pool was surprised that the Tribe was first to open a high-stakes bingo hall and casino in the U.S. And he was moved during a day-long visit to Egmont Key to find that ancestors had endured a pre-chapter of the Trail of Tears that took them as prisoners by ship to the Florida Panhandle.

“Everyone knows of the Trail of Tears, but not about Egmont Key. It must have been very, very tough for their ancestors,” Pool said.

The 37,000 strong Army Corps of Engineers is 98 percent civilians who assist the U.S. military by building infrastructure and facilities in 130 nations worldwide. Everglades restoration, oil spill cleanup and rebuilding after weather disasters are among major environmental projects.

Museum educator Joy Murphy, who was the lead organizer, said the event was the second since 2008 that the Tribe opened its doors to the Corps for the purpose of education. Respect for Tribal land, traditions, government and culture is paramount, she said.

“We really hope, above all, that people from the outside can take the information and be able to work better with Tribal members and government,” Murphy said.