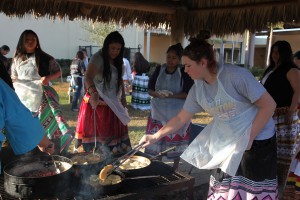 BRIGHTON — Cooking and carving have been traditional trades for the Seminole Tribe since the beginning of their existence, and it’s a tradition Pemayetv Emahakv Charter School continues to teach its students.

The Culture Department wrapped up their second year of cooking and carving classes on Jan. 12 as the middle school girls prepared and served Indian tacos under the chickees.

“They are supposed to take lead and do the full meal by themselves with us just supervising with no help,” Arts and Crafts teacher Janelle Robinson said.

Last year, the Culture Department added traditional cooking and carving to the upper classmen’s arts and crafts curriculum. The younger grades continue to focus on beading and patchwork, making necklaces and pillows, while the older students get a chance to take it outdoors to an open fire.

“I think it’s a great opportunity,” Principal Brian Greseth said. “By having the culture classes, the students are really allowed to realize what their background is, where their roots come from, what their ancestors did before them. They have an understanding of who they are and where they come from. I think in the society today that’s kind of been lost.”

Leading up to the last day, the girls practiced making flatbread, frybread and pumpkin bread. Instructors taught the girls how to properly mix the ingredients and to place the dough in oil over the fire.

Meanwhile, the boys learned to carve canoes, knives and spoons out of cypress wood. Instructors taught them how to slowly carve and shave the wood to perfection.

“When we first started at the school, we didn’t have carving and cooking but as the school progressed, we started having more activities,” seventh-grader Trevor Thomas said. “I like it better than sitting in the classroom. I want to learn more about the culture and where we came from.”

Thomas has one more year to hone his carving skills, but for eighth-graders Michael Garcia and Kalgary Johns, this was their final year learning their culture in a classroom setting; Next year, they’ll head to high school, where Seminole arts and crafts will not be part of their everyday schooling.

Although Garcia and Kalgary said they are sad that the classes are coming to an end, they said they will take their skills with them and they’re optimistic about continuing to practice what they’ve learned.

“I’ll continue to make necklaces and bracelets,” he said.

Johns said she will continue learning her culture and language by participating in the classes the reservation offers high-school students.

“I will take everything I’ve learned over the years so we can have it in the future and it doesn’t die out,” Johns said.

Robinson said she loves to hear about her students going home and wanting to attempt to make something they’ve learned in class. She wants the students to take as much as they possibly can with them, even if it is just a small piece, because it can be one more piece carried down.

Robinson said she heard that one of her students went home after a flatbread lesson and tried to make it during the following weekend. Although the student was upset because it didn’t come out well, Robinson was still proud that the student tried.

“They moan and they complain, but back at that age I probably did the same thing and I just remind them that they will appreciate it later,” Robinson said looking around at her students. “I’m looking right here at the boys and you might see your next master carver or you may have your next best frybread maker.”

The school hopes to achieve just that.

At the closing of the final class, the boys lined up and the students said the blessing in their native Creek language.

The girls then served the boys as they spooned the saucy meat over frybread and topped it off with lettuce, tomatoes and cheese, completing their first traditional meal on their own.

“I hope that they carry [on] what they’ve learned,” Principal Greseth said.