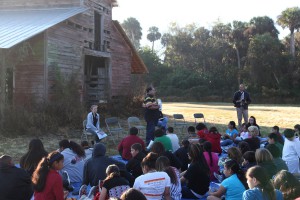 BRIGHTON — Students of Pemayetv Emahakv Charter School took a culture field trip to see the oldest standing building on the Brighton Reservation. Students in the sixth, seventh and eighth grades visited the famous Red Barn on Jan. 10 and saw where many of their grandfathers and great grandfathers got their start in the cattle business.

Willie Johns, a Tribal historian who spent much of his childhood at the Red Barn, talked to the students about the impact the Red Barn had on the Seminole Tribe and the Brighton Reservation.

“It became the focal point of the reservation,” Johns said. “The cattle industry was the way Seminoles made their money.”

Johns spoke about the great Charlie Micco, who was the head of the cattle crew at the Red Barn since it was built in 1941. He named other well-known Tribal men, such as the late Frank Shore, Howard Micco, Norman Johns, Amos Tiger and many others that put a surprising look on some of the students’ faces as they heard their relatives’ names called, tying them personally to the historical significance of the Red Barn.

“This is your history,” Johns said. “And you should be proud. I would want to know if my grandfather was a part of this.”

The students learned about the Seminole Tribe’s involvement with cattle. Johns explained how the Tribe has worked with cattle since the 1700s and has become the fourth-largest cattle operation in the nation with more than 60,000 head of cattle.

“We don’t sell to the Hard Rock,” Johns said. “By the time the meat is ready, it’s already sold out. We can’t meet their demand.”

Following Johns, Carrie Dilley, an architectural historian for the Seminole Tribe’s Preservation Office in Hollywood, talked to the students about the historical importance of the Red Barn.

Dilley told students how the Tribal Preservation Office has worked hard during the past several years to preserve the Tribe’s historical icon and to help make it become the first Seminole building to be listed on the National Register of Historic Places.

The National Register of Historic Places is America’s official list of cultural buildings and resources worthy of preservation. The 70-something-year-old Tribal building made the list in December 2008, after being nominated for its connection to the cattle industry.

“We definitely want to preserve it and keep it from deteriorating,” Dilley said. “It’s good for the Tribe, not just on a local level but by being recognized on a national level.”

Dilley also explained to students that following the Red Barn’s National Register listing, structural engineers conducted a laser scan out of Jacksonville to create 3-D images and models of the barn in case anything happens to the building and needs to be restructured or built.

“What do you think we should do with the barn?” Dilley asked students.

Many students said to preserve it just as it once was, while others responded to just let it be.

“Once it’s gone, it’s gone,” Dilley said. “Those pieces will be gone forever.”

Johns believes anything and everything should be done to preserve the barn.

“It should remain here and be a reminder to our people that this is our past, this is where we came from, and not just be a place to come and play, but a place to be remembered,” Johns said.

Students got a tour inside the barn and got to see the stables that once housed the horses that herded cattle. Johns pointed out the loft and reminisced of his youthful days spent in the barn. He told stories of how he and his friends jumped from the rafters.

Unfortunately, the restoration process has been on hold because of arsenic found inside the barn. Before moving forward, the arsenic must be removed by the Environmental Resources Management, the leading global provider of environmental, health and safety, risk and social consulting services. The Tribal Preservation Office hopes to have the removal done during the summer so the preservation project can continue.

Before climbing back into the buses, students gathered in front of the Red Barn for a group photo, preserving their visit to the historical Tribal landmark.