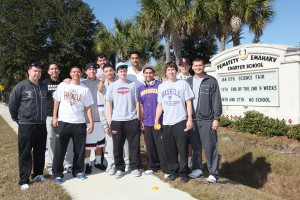 BRIGHTON — The Seminole Tribe strongly advocates education. Through various programs and events, the Tribe has emphasized the importance of college to its youth. One way the Tribe has encouraged secondary education is through athletics.

Today, Brighton has some of their very own Tribal hometown young adults to look up to, including Deuelle Gore, a member of the Haskell Indian Nations University men’s basketball team.

The men’s basketball team from Haskell Indian Nations University in Lawrence, Kan. stopped by for a visit at Pemayetv Emahakv on Jan. 6, while in Florida for two basketball games in surrounding cities. Gore, however, was unable to make the trip to his home reservation with his team.

Gore’s teammates toured the Charter School and spoke to the middle school students about the importance of academics.

“Any opportunity students have to address a panel, whether it be a Tribal college or not, is an opportunity for them to gain more knowledge about the collegiate experience and expectations,” said Emma Johns, Seminole Tribe Director of Education. “I feel that the more exposure to higher education institutions, the more well-rounded our children will be in terms of making choices beyond high school. There is a ‘fit’ for everyone. For some it may be a Tribal college, and for some it may be Harvard or anywhere in between.”

“I wanted the students to know that playing sports doesn’t have to end at the high school level,” she said.

While speaking to the older Charter School students, the basketball players told them that sports can help put you through college, but you must keep your grades up.

On the tour of the school, the players were impressed with the technology that is available to the students of Pemayetv Emahakv.

“I believe that it is important for other Tribes to see what emphasis is put on education,” Burgess said. “As a parent, I am very proud of our school and what is available to the students.”

At the end of the team’s visit, the Charter School’s Parent Teacher Student Organization presented them with a $1,000 donation.

“We do feel it’s nice to support other Tribal schools and other Tribes in general because we are in a position to do so,” Thomas said.

Many other Seminole Tribal members have attended Haskell through the years. Miss Florida Seminole Princess and Brighton’s own Jewel Buck currently attends Haskell and plays on the women’s basketball team.

Burgess said she visits Haskell University at least once a year to maintain connections and to help foster the concept of college.

“I have included my son, Ruben, on these trips lately,” Burgess said. “He enjoys visiting the college that I attended, and he talks of when he will attend college.”