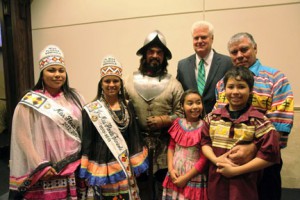 TALLAHASSEE — Florida songwriter Frank J. Thomas, whose songs about Seminole Indians and Florida Crackers are Florida music legend, was awarded the highest cultural honor in the state recently when he was inducted into the Florida Artists Hall of Fame at the Florida Folk Heritage Awards.

Thomas, a longtime friend of the Seminole Tribe, was delighted.

“You know for an old Cracker boy that grew up over in rural Clay County it’s hard to believe some of this is happening,” Thomas said. “As my friends will tell you, I don’t consider myself nothin’ extra. I have written a lot of songs about Florida and I dearly love this state.”

Detzner opened the show by introducing Chairman Billie to the audience.

“Chairman Billie, we applaud your personal vision for cultural programs for the Seminole Tribe of Florida, including the Ah-Tah-Thi-Ki Museum of History, programs for seniors, student educations program and your long-time dedication to the Florida Folk Festival,” he said.

Chairman Billie, a friend of Thomas, gave attendees insight into the Seminole Tribe by describing how Seminoles have fought against and with the U.S. and have endured.

“By the time the Seminole Indians finally crawled out of the swamps in the 1900s and finally got used to the environment in Miami, Fort Lauderdale, Naples, Immokalee, Fort Pierce, one of the first things that put money in our pockets was tourism. Somewhere in the Miami area, a white man picked up an alligator and wrestled around with it, a bunch of tourists liked it and said, ‘Hey that would look better if an Indian did it,’ and the next thing I knew, we started wrestling those alligators. The tourists would throw money into the alligator pit and the rest of the day we would spend trying to find those nickels and quarters. But it served us well.

“There always seemed to be tourism in my blood. When [the] Seminole Tribe was organized in 1957, so be it we had an Indian village called Seminole Okalee Indian Village. We went to alligator wrestling and tried to do other things. These were the years that the Indians were trying to cut each other’s tongues out, meaning we were trying to catch up in this marvelous system so fast and so bad, with the desire to learn what we called ‘the white man’s way,’ to learn to read English, and do arithmetic and all that when we started into school.”

Chairman Billie explained how this led to kids born in the 1950s not knowing their own language. However, by the 1970s, Seminoles of older generations began once again trying to teach their culture and language.

“Today, we are doing well; our culture is still intact,” he said.

Brianna Nunez, Jr. Miss Florida Seminole, educated the audience about her dress and patchwork: “Our clothing is known around the world. In my traveling, I always have people come up to me saying, ‘Let me feel your dress. Did you make this?’ It’s overwhelming.”

She went on to explain the patchwork and the meaning of the different designs: “Turtle, Broken Arrow, Panther, Man on Horse – they keep our traditions going. It gives us a chance to express where we come from.”

Alexis Aguilar, Miss Florida Seminole, was next to address the crowd, which observers said was the largest since the awards began in the late ’80s. She began, as Nunez did, saluting the crowd in her own language.

“You notice Brianna spoke a different language from me. Because our Tribe is Creek and Seminole, she spoke Creek and I spoke the Miccosukee language. Our Tribes came together in a melting pot of culture and that is what you guys know today as the Seminole Tribe,” she said.

The evening ended with the inductions into Florida Artists Hall of Fame which is Florida’s highest cultural award.

Other 2013 inductees included 19th-century painter Laura Woodward, who was awarded posthumously, and Miami’s own Gloria Estefan. Estefan sent a video accepting her award. The awards ceremony included winners of the Secretary of State Historic Preservation Awards and the Florida Book Awards. On hand was an actor from Viva Florida 500 who portrayed explorer Juan Ponce de León on a search, he said, for Tribal historian Willie Johns.

Thomas, who has written more than 500 songs about Florida, is known as the Dean of Florida Folk Music, his songs performed for decades at venues and cultural events throughout the Sunshine State and on National Public Radio (NPR).

Chairman Billie joined Thomas on stage when his old friend received the award:

“I would like to invite all of you to come over to the Florida Folk Festival, Memorial Day weekend, in White Springs, a beautiful old town on the Suwannee River, and see a celebration of who we are here in Florida, where all the different cultures come together in this one event. The conchs down in Key West, the Tarpon Springs divers, to the Seminole Indians, the Minorcans over on the East Coast …”

Thomas had the last word.

“We are Florida,” he said. “And we are showing ourselves off to the world.”