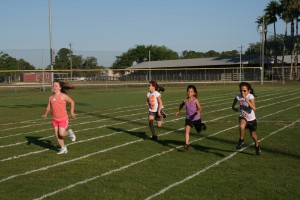 BRIGHTON — Students of Pemayetv Emahakv Charter School gave it their all on March 15 as they competed in the schoolwide track-and-field meet held at the Ollie Jones Memorial Softball Park on the Brighton Reservation.

Students participated in up to three events, vying for a first- or second-place finish that would qualify them to compete in the HERSHEY’S Track & Field Games on April 27 in Okeechobee.

Prior to the school’s meet, students had to complete a track unit in their physical education classes, where they were also given opportunities to practice and hone their field event skills.

After concluding the track unit, students had the opportunity to choose the events they wanted to compete in.

Twelve-year-old Rudy Juarez chose to compete in the two field events along with the 4×100-meter relay with his friends.

“We have been training in P.E., and I wanted to do the standing long jump and the softball throw for fun to see how far I could throw it,” Juarez said. “My strongest event is the long jump. I do it every year, and I’ve been getting better.”

Physical education teacher Chris Goodwin said they allow the students to sign up for what event interests them most, but they do offer advice when it comes to the relay.

“On the relay team, kids were encouraged to put the faster ones on and stack a team,” Goodwin said.

In Okeechobee, students will compete against students from different local schools for a chance to advance further in the HERSHEY’S Games.

“We feel that although we are very small in number versus the other schools in town, we always come to compete,” Goodwin said.

The annual HERSHEY’S Games is the largest youth sports program of its kind in the U.S. and Canada, with more than 400,000 participants.

Donald Cohen started the competition more than 30 years ago to promote fitness, self-esteem and hard work. The Hershey Co. became the official sponsor in 1978. Since its beginning, the HERSHEY’S Games has had future Olympic medalists and professional athletes participate.

“The track and field offers competition and a venue to showcase their skills,” Goodwin said. “It also gives an opportunity to display sportsmanship and friendship with students from other schools.”
Students compete across North America to become one of 480 finalists at the grand finale event held in none other than Hershey, Penn.

“The kids get better from year to year, and we have had students go on to state and national levels competing,” Goodwin said. “We are always proud of the effort our students give, and we are confident in the upcoming meet.”