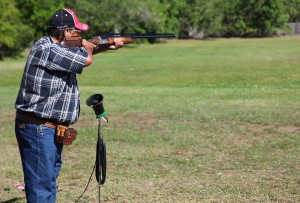 TAMPA — He stepped up to the line in his blue jeans, plaid shirt and Seminole Tribe hat, loaded his Perazzi shotgun and yelled, “Pull!” As an orange clay target shot out of a machine at 42 mph, the 66-year-old’s bullet flew out at 1,145 feet per second, smashing the target to smithereens. His body jolted as he absorbed the impact from the kick.

It was another hit for Marcellus Osceola Sr. – one of thousands he’s made in his successful trapshooting career of more than 30 years.

“You can’t imagine how much tension it builds up,” he said in between rounds at the Amateur Trapshooting Association’s Southern Grand in Odessa on March 16. “Just your nerves, you know.”

Osceola, a trapshooting champion, has ranked among the top 50 in the world and was inducted into the Seminole Sports Hall of Fame in 2004. At this year’s Southern Grand, he was the in-state high overall winner of the tournament and the in-state high all around winner in the Veterans category, breaking 1,210 out of 1,300 targets.

Trapshooting is known to be expensive, especially for someone like Osceola who competes in several tournaments a year. Participants have to pay entry fees, buy tons of shells and often travel great distances to compete – so room, board, flight and rental car costs add up quickly. But Osceola has help with all that now.

For the first year, Seminole Sports Management is sponsoring the Hollywood Tribal senior.

“I think it’s long overdue,” said Hollywood Councilman Marcellus Osceola Jr., who was one of the first Tribal athletes to be sponsored by the program when he was playing golf in 2009-2010. “I think it’s a great test to our program to show our youth, if not some of our elders, that no matter how old you are or how young you are, you can go out there and find something to compete in if you desire.”

The Tribe’s sports program helps Tribal members improve their semi-professional rankings within their sports and can help them achieve professional status. After overhearing that the Tribe was looking for a senior to sponsor, Osceola inquired, and the Tribe had found their man.

“The Tribe is behind me,” he said. “It makes me want to win more. Maybe the kids will see it and want to shoot, and I could teach them.”

“I think it’s very important that we keep promoting our Natives throughout Indian Country and throughout the world,” Councilman Osceola said.

The program also helps get the Tribe’s name out to new places. Sponsored athletes sport the Tribe’s logo on hats, shirts, bags and even boats during competition.

“It reaches markets the casino doesn’t tap into,” Bowers said.

Osceola’s trapshooting career began in about 1979, shortly after he pioneered the sale of discount cigarettes on Seminole Reservations and started the first smoke shop. Osceola wandered over to the Winchester Gun Club one day, and manager Marvin Flores encouraged him to compete after watching him shoot. He’s since travelled across the country, winning several state titles, zone trophies and national trophies.

“I always enjoyed this sport because it’s part of my life,” he said. “I made a lot of great friends, met a lot of people.”

In 1980, during his second year participating in trapshooting, Osceola helped break a world record. His squad of five men hit 998 out of 1,000 consecutive shots, surpassing the previous record of 997; he hit all 200 of his shots.

“When you break ‘em all, that’s the best,” he said. The record’s since been beaten by one shot.

That same year, he broke all 100 targets in both the doubles and the handicap division, and he broke all 200 targets in the singles division. He also placed third overall in the 1983 Grand American Trapshooting Championship.

“He’s got a talent for it and the determination to win,” said friend and fellow squad shooter Tom Wilkinson.

Now competing in the Veterans division (ages 65-70), Osceola continues to rack in the wins. Currently, he is ranked second in the Veterans Team for the Florida Trapshooter’s Association.

“He’s always got a funny story to tell you about his trip,” Bowers said.

After Osceola’s recent competition at the Spring Grand American tournament in Tucson, Ariz., he chuckled with Bowers about his old age and his shoulder starting to bother him from all his years of shooting. But he still won the tournament’s Doubles Championship in the Veterans division.

For Osceola, shooting is a family affair. He taught all four of his sons how to shoot as well as daughters Marissa Osceola and Michelle Osceola. Some of his sons still practice with him at the Big Cypress Reservation, Winchester Gun Club and Markham Park.

“They all shot good at one time,” he said.

Currently, son Bill Osceola competes on his father’s squad with him. Bill was the Class AA Winner in the Preliminary Doubles in both the Southern Grand and the Florida State Shoot last month.

Son Raymond Osceola enjoys shooting just for practice, while son Gregory Osceola took it to competition, having made the Junior All-American Team in 2005 and 2006 and having placed as the Southern Zone High All Around Champion in 2006.

Councilman Osceola had his time at the range as well, having won a few events at the Las Vegas and Ohio State shoots; he was also the overall winner of the 1,300-target Winter Chain Shoot in West Palm Beach a handful of years ago. Although he said he doesn’t have time to shoot anymore with his job in Tribal government, he’s thankful that his dad has the sport as a lifelong hobby.

“He needs that like he needs air to breathe,” said Councilman Osceola, who compares his father’s talent to that of Billy Mills, the Native American Olympic gold medalist runner.

The veteran trapshooter said the sport is one that’s been worth passing on.

When he isn’t trapshooting, Osceola is serving the Tribe as a land use commissioner and a gaming commissioner. He also runs his own material waste disposal company on the Hollywood Reservation.