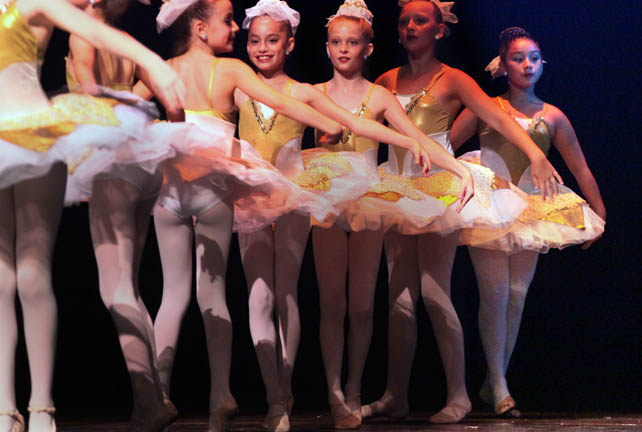 DAVIE — From ballet bun to twirling toes, sisters Harmony and Jaylee Cypress radiated star power when each took the spotlight on the Bailey Hall stage May 31 as students of Performance Edge Dance Studio.

The girls, who live on Big Cypress Reservation and attend American Heritage School in Plantation, overcame a few backstage jitters before their performances.

“It’s so full of excitement. It’s the makeup, the changing costumes, the knowing that we can finally show all the work that we do,” said Harmony, 10, daughter of Nancy Ortega.

Harmony performed in eight of the 62 acts in the year-end Revolution 2014 show by the Weston dance company and school. Nearly every variety of dance spotlighted by the cast of more than 250 students was accompanied by equally diverse music. Hip hop, classical, show tunes, pop and rock punctuated months and years of dance rehearsals and dedication.

Jaylee said waiting backstage for her one dance, the 54th of the afternoon production, was as much fun as performing her number. In her first year of formal training, she watched some of the production from the theater wings.

“I can see the dancers going out and coming back. And when I wasn’t watching I could hear the dancing and the music,” Jaylee said. “It’s fine to wait my turn. I just have to stay focused.”

Jaylee danced with more than a dozen other beginners in a golden, glittery jazz piece that incorporated many novice elements, including step claps.

Janie Valdez, Jaylee’s mother, said Jaylee and Harmony are not only sisters but also close friends who support each other through long days off the reservation. On a typical school day, they wake up at 5 a.m. and wind down around 8:30 p.m. Valdez and Ortega support their daughters and each other.

“They get a little nervous about performing, but I think moms are more nervous,” Valdez said.

For Harmony, juggling school and dance is a blast.