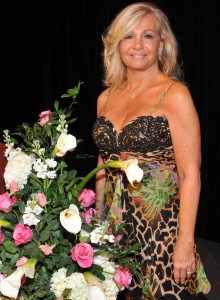 HOLLYWOOD — The 1000+ Club recently honored Hollywood Hard Rock employee Susan Renneisen as one of 13 Women of the Year for her involvement with Winterfest.

The 1000+ Club, a Broward County nonprofit committed to supporting cancer research, education and patient services, honored the nominees for their charitable work at a Women of the Year luncheon on April 4 at the Marriott Harbor Beach Resort in Fort Lauderdale.

“Susan rocks Broward County with her involvement in numerous charitable organizations, making a difference in the lives of so many,” said Debbie Dolchin, 1000+ Club president.

Renneisen is in her ninth year as Hollywood Seminole Hard Rock’s director of special events and community relations liaison. In addition to serving as an executive committee board member of Winterfest, she sits on the boards of the Russell Life Skills and Reading Foundation; the Ann Storck Center; and the Art and Culture Center of Hollywood.

“I always take pride in representing the Seminole Hard Rock,” she said. “I have been able to not only touch the community through Winterfest, but my involvement in several other charities and community events were brought to me by my involvement with Winterfest.”

For instance, through Winterfest she learned about the Ann Storck Center and came up with the idea for Hard Rock to donate musical instruments to the center for artists to decorate and sell. After the December 2010 Winner’s Way Parking Garage opening, Hard Rock donated 2,400 smashed guitars to the center, where artists jazzed up the fragments with glitter and jewels to sell at various festivals, including the Winterfest Boat Parade’s Black Tie Auction.

Incorporated in 1988, Winterfest has grown from a local celebration into an internationally known holiday festival, attracting more than 1 million spectators to the Fort Lauderdale area, according to Winterfest’s website. The 2012 event will take place on Dec. 15.

“It brings the community together in so many different ways,” Renneisen said.

Several Winterfest board members and Hard Rock employees attended the 1000+ Club luncheon to support Renneisen, who received a 1000+ Club gold medallion she plans to wear at future community events.

“So many of the other women give so much of their time to an amazing variety of causes that it was a tremendous honor to be part of such a prestigious group,” she said.