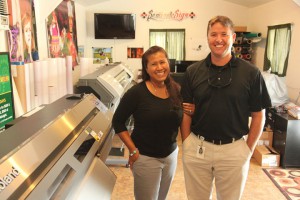 BRIGHTON — Signs are something most people look at but rarely think about beyond the information they provide. Laverne and Jason Thomas are not like most people; as the owners of Seminole Sign Company, they are engaged with signs on a daily basis.

Back in 2000, when his father needed a sign for his business, Jason got some vinyl lettering and made it. This humble beginning led to the formation of Seminole Sign Co. Now, the couple makes banners from their home in Brighton.

Laverne and Jason grew their startup business steadily through word of mouth. Mostly, Seminole Sign Co. produces signage for numerous Tribal departments, as the Tribe serves as their biggest customer. They also receive orders and submit bids to outside businesses. As the face of the company, Laverne gets out in the communities, travels to all reservations and meets with existing and potential customers. Jason makes the signs in the studio behind their home.

“In the beginning, we couldn’t keep up with the demand, so we bought a 54-inch digital color printer,” Jason said. “We bit the bullet and did it. That was the best thing we ever purchased.”

Seminole Sign Co. expanded faster than the Thomases expected, so they opened a store in 2003 in Moore Haven and eventually moved it to Okeechobee. They handled a variety of printing orders, including full-color wraps, signs, posters, magnetic signs, screen printing and banners. A recession heavily impacted the business starting in 2008, so they closed the store, moved back to Brighton and started over in the same place they began.

“We had no employees and no overhead,” Jason said. “It was just the two of us.”

Jason works full time in the Tribe’s Information Technology Department, and Laverne works part time in the Community Culture Department. Despite their jobs, the business began to grow again. The turning point came in the form of a telephone call from the Tribe’s Gaming Department.

“We had been trying to get in there for a long time,” Jason said. “They wanted us to bid on jobs. We won some bids and proved ourselves.”

Once Seminole Sign Co. became a vendor for the Brighton Casino, the Thomases knew that the casino’s needs exceeded their equipment. They bit the bullet once again and purchased a 74-inch printer, which increased their productivity and allowed them to produce larger signs in-house and to submit more competitive bids.

The Thomases invested heavily in their equipment because they believed the best equipment would produce the best quality products. As with many small businesses, when necessary, they subcontract certain jobs out to other companies. With the addition of the larger printer and many other pieces of essential equipment, Seminole Sign Co. only needs to sub out the largest flatbed printing jobs.

“The turnaround time is important, and the casino deadlines are tough,” Jason said. “But we always meet the deadline. When you do the work yourself, you can do things quickly.”

Quality is paramount to the business. They said they use only the highest quality materials and have a top-notch designer on staff. The Thomases have put in a lot of long hours and late nights to make Seminole Sign Co. a success.

“I spend a lot of time in meetings,” Laverne said. “People like to give business to whoever is local. And we put out a good product.”

The Thomases are proud of the professional quality of their signs.

“It’s a good, clean business, and the satisfaction level is through the roof,” Jason said. “We get satisfaction knowing not everyone can do this; it’s a highly skilled job.”

Some of the challenges include the late nights, making deadlines and spotting spelling mistakes before printing a sign. Living and working in Brighton also presents a unique challenge for the business, as suppliers do not deliver there. This forces Jason to travel to Fort Myers to get supplies, purchasing more than necessary and storing them.

“They get right in the mix,” Jason said. “They ask questions, not that we expect them to become sign makers. I’d like to see the business continue, but all we can do is give the kids a skill set and opportunities. They will make their decisions in life.”

Because of a lot of hard work and the support of the Tribe, Seminole Sign Co. has prospered.

“The support the Tribe has offered is like nothing I’ve ever seen,” Jason said. “The Tribe is our family, and they want to see us succeed as much as we do.”