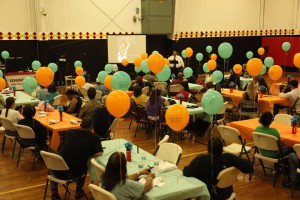 HOLLYWOOD — Surrounded by family and friends, Loretta Micco remembered her late husband, Vincent Micco, at a memorial dinner on Aug. 30 at the Hollywood Gym. The room, festively decorated with balloons hovering above the tables and photographic memories projected on a large screen, beckoned people in to pay tribute to their friend.

Vincent, who worked for multiple departments within the Tribe, including SPD as a service aide, passed away in a motorcycle crash in Big Cypress on Aug. 26, 2011. The event gave those who loved and miss him a chance to share their memories. About 100 people celebrated his life at the memorial dinner.

Signs of Vincent’s passion for life loomed everywhere, from the Miami Dolphins logos worn by many attendees to the dessert table of 20 lemon meringue pies, his favorite, to the choir from Brighton’s All Family Ministries Church who sang his favorite hymns in Creek and English.

“It’s been a hard year,” said Loretta, who was married to the love of her life for 29 years. “I think of him all the time. Sometimes I laugh; he makes me laugh even now. I know him being gone has affected a lot of people, and it helps me when they tell me. I don’t feel like I’m the only one that’s hurting.”

Vincent and Loretta met in Hollywood when they were 22 years old. He was from Brighton, but his mother lived in Hollywood. One of their favorite songs was Joe Cocker’s You are so Beautiful, which served as background music for a photo montage of Vincent’s life. Throughout the presentation were photos of handwritten love notes from Vincent to Loretta, many written for no special occasion at all.

“He was such a great person,” Loretta said. “I can’t think of anyone else that was so special. He was extraordinary and always thought of others before himself.”

Motorcycles were a big part of Vincent’s life. He started riding in 1993, and in 2003, he created the annual Jerry Micco Sr. Memorial Ride in honor of his father. Last year, the cyclists stopped not only at Jerry’s grave but also at Vincent’s.

“Vincent was always fun,” former Councilman Max Osceola said. “One Halloween, he was about 35 years old; he wore the best costume – just a diaper. Maybe now we can’t touch him, but he is always in our hearts.”

Friends and neighbors shared many reasons for missing Vincent.

“We miss him dearly,” Hollywood Board Rep. Chris Osceola said. “I miss seeing him ride around in his Miami Dolphins golf cart or playing with his dog.”

The occasion brought comfort to Loretta, who appreciated everyone’s memories of Vincent. She and her husband were religious people, and her belief in Jesus gives Loretta strength now.

“I’m happy that I sure will see Vincent again because I know Jesus,” Loretta said.