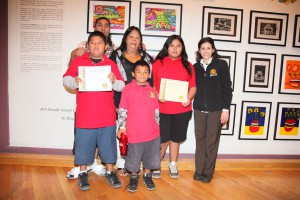 BIG CYPRESS — Ahfachkee School students now have their very own art exhibit at the Ah-Tah-Thi-Ki Museum.

Thanks to a collaborative effort between the school and the museum, 25 students showed off their work in a collection titled “Mosaic: The Art of Ahfachkee Students – Big Cypress Reservation.”

“The Mosaic exhibit is a type of gathering of all the different creative minds and styles from all the students,” Museum Programs Officer Paul Perry said. “It’s simply a lot of tiny pieces to form a whole picture of this exhibition.”

On Feb. 8, Ahfachkee students from the third, fourth and fifth grades took a trip to the museum to view 21 of their masterpieces.

Perry said they’ve been working with the Ahfachkee School on the project since 2010.

“This is a brand-new initiative in the sense that we wanted to feature the students’ artwork from all grades,” Perry said. “We wanted to erect a dedicated student art exhibit at the museum.”

In October 2011, the Ahfachkee School’s kindergarten, first-grade and second-grade art students viewed their work at the museum. The final art group, which includes grades six-12, will make its trip to the museum later this year.

“The kids studied famous artists from the past and re-interpreted their drawings through their own eyes,” Perry said.

Ahfachkee art teacher Ivette Lopez was instrumental in the students’ artwork designs, which were painted and drawn with a variety of art techniques such as print, watercolors, acrylic and mixed media.

“The students were inspired by artists such as Vincent van Gogh, one of the most famous artists in the world,” said Lopez, who worked with her students on these designs during four weekly art courses.

“Paul Klee, a Swiss artist, was another one they were inspired by as they re-interpreted designs from his famous shapes and patterns,” Lopez said. “Jasper Johns, an American artist, was the inventor of the letters and numbers drawing designs. The students learned a lot from them.”

The Ahfachkee School awarded the art students with Excellence in Art certificates following the art exhibit presentation. To further recognize the Ahfachkee students, the museum plans to host a special end-of-year reception in May and present them with their own commemorative exhibit catalogs.

Lopez said she’s extremely happy that her students had this opportunity to display their art.

“They are all very talented,” she said. “As Native Americans, they have art on the inside. It just comes out in a natural way for them.”