BRIGHTON — It’s been a fun and spirited basketball season for the Pemayetv Emahakv Charter School (PECS) Seminoles.
Both the girls’ and boys’ basketball teams completed their seasons on Jan. 24, after playing on the road against Clewiston Middle School. 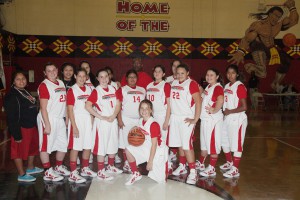 PECS Lady Seminoles head coach Tim Thomas said he could recall at least two standout moments when the girls shined on the court this season: the 36-12 season-opening win at Osceola Middle School on Nov. 30 and the 46-24 win over Yearling Middle School in Okeechobee on Dec. 16.

“I remember our rivalry game with Yearling,” Thomas said. “We really wanted that game.”

In the Dec. 16 game, PECS Seminoles’ star Shae Pierce led all scorers with 32 points, helping bring her team to victory.
The Lady Seminoles finished the 2011 portion of their season with a 5-1 record, having defeated West Glades Middle, Moore Haven and Yearling.

The loss to Storm Grove Middle, however, was a rough moment that the team had to overcome.

“A lot of my girls were away on a trip the week before,” Thomas said.

“Even though they had just flown back home from Washington, D.C., they learned how to shake off the rust from the break they had.”

After a 37-13 win over Clewiston Middle School at Brighton on Jan. 5, the Lady Seminoles lost two in a row to Sebastian River Middle and Yearling Middle to drop to a 6-3 record.

The rest of the 2012 portion of their schedule proved to be a lot smoother, as the Lady Seminoles finished their last five games with a 4-1 record, with the only loss coming against Sebastian River Middle.

“I told my girls that if we worked hard in practice, played team defense, forced turnovers and got easy baskets, then we would be successful,” Thomas said.

“I really thought the girls played hard and aggressive every game. If they can play in some basketball tournaments in the offseason and continue to work on their ball skills, then I can see us going undefeated next year.” 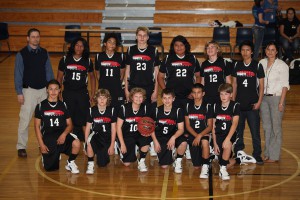 For PECS boys’ basketball head coach Ryan Tedders, this season proved to be challenging, yet rewarding.

Despite the 4-10 final record, he and his team learned the virtues of patience and steady growth throughout the 14-game season.
The boys started out their season with a 0-2 record before storming out to its first win of the season, a 48-19 road win over West Glades Middle on Dec. 12.

Tedders said the win over West Glades was one of the team’s best games. After a strong beginning, the starters chanted some of the non-starters names, encouraging him to give them playing time.

“Our starters unselfishly gave up their usual playing time to see their teammates gain some valuable experience,” Tedders said.

“That was the beginning of all the players coming together as a team,” Tedders said.

“The team as a whole grew early in the season because teamwork was emphasized and practiced,” Tedders said.

“The group started to become a cohesive unit, and they started to really believe in each other as teammates.”

The boys played their final eight games of the season in January, including two games against Clewiston Middle, two games against Sebastian River Middle and rematches with Moore Haven, Storm Grove, West Glades and Yearling.

The Seminoles started their 2012 portion of the schedule with three straight losses before bouncing back with a 44-25 home victory over Moore Haven.

“Although our team was undersized against our opponents, they played with heart and determination,” Tedders said.
“They never once got down and out. Each game was another challenge that they embraced and tackled head-on with 110 percent effort and pride.”

All of that showed on the court, even in the Seminoles’ final four games – a 1-3 season-ending stretch.

The Seminoles defeated West Glades 41-7 before finishing out their season with a three-game losing streak.

“I saw a lot of improvements as the season progressed,” Tedders said. “We can definitely build upon this next season by continuing to enforce the value of teamwork.”