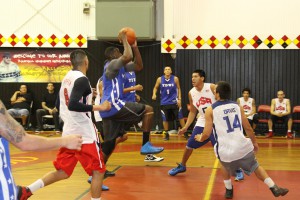 HOLLYWOOD — For Kelvin Huggins, his brother Randall’s memorial tournament is a celebration of a life that was taken too soon, which occurred on Kelvin’s birthday.

“[The tournament is] more like my birthday than my real birthday,” Kelvin, 29, said.

A dozen years ago on Oct. 29, Kelvin watched Randall, 21, pass during a sparring match at the former Warriors Boxing Gym on US-441.

Despite the tragedy, the Huggins family pulled together to commemorate Randall’s life, joining two of Randall’s loves into one weekend every December: the Big Ballers Basketball Tournament and Strictly Business Car Show. Here, Kelvin remembers his brother Randall’s best days. Here, he can celebrate.

“It’s a good thing for us,” said Randall’s mother, Kathy Huggins. “It keeps us together.”

Kathy; her husband, Trail Liaison Norman Huggins; and children Marilyn, Kelvin, Adriana, Bianca, Kailyn and Lucas organized the basketball tournament for the ninth year. The tournament has built a reputation as one of the biggest Native-only basketball tournaments on the East Coast, and possibly the country, Randall’s father, Norman, said

“They come out and help us keep his memory alive and help us celebrate his life,” he said.

This year, the tournament drew about 280 ball players divided among 17 men’s and 11 women’s teams.

“Even with the economy, I was kind of surprised we had that many people,” Norman said, referring to travel costs that could discourage out-of-state teams.

“I think it blew up in year three,” Norman said. “It kind of went national. How did that happen? Through friends and this thing called social media network and word of mouth…We don’t look for people no more; they come to us.”

Nadgelin Cliffe, of the Campbell River Indian Band, came from British Columbia to play with the Coastal Natives.

“It’s a get-together with all of our close friends, and we get to play basketball,” said Cliffe, who returns to play in the tournament year after year. “What could be better?”

Norman said the hospitality and the big cash prizes draw people in and keep them coming back, and Cliffe couldn’t agree more.

“It’s definitely a treat to come here,” she said, emphasizing how well the players are treated.

Throughout the three-day tournament, the Huggins family provided free T-shirts, free refreshments, free catered food (culminating in a home-cooked meal on the final night) and free admission, all in the warm spirit of Randall.

“He was full of life, always smiling, willing to help out any way he could,” said Randall’s cousin Savannah Huggins.

Norman prides himself on the generosity the family shows the tournament’s players. This year, they offered free onsite chiropractic care and free massages.

“We’ve traveled the country going to different tournaments, and nobody’s going to take care of you better than we do,” he said. “We’re known for our hospitality.”

On Dec. 6, the Huggins family welcomed players and supporters to the Hollywood Gym for the first day of the tournament. About 50 people filled the bleachers for the kick-off game, which pitted Nothing Fancy against the Redsticks.

“Let’s get ballin’,” Norman said, and the referee blew the whistle to begin.

The tournament continued on Dec. 7 with so many games scheduled that some were held at the Jewish Community Center in Davie. The excitement built as teams vied to make the championships on Dec. 8. There was particularly steep competition this year, Norman said.

“Every year is kind of unique in its own way,” he said. “What I liked about [this year] was we had about five or six (men’s) teams that could win it. Here, we’re kind of known for competition. Even the women’s, there were about three or four (teams) that had the chance to win.”

In the end, women’s team ABC, of Arizona and New Mexico, took the title for the second consecutive year against the Lady Ballers, 71-48.

“That game was kind of like a payback,” Norman said, referring to how the Lady Ballers beat ABC by nearly 30 points in the quarterfinals. “They woke up in the championship game. They took control of the game early and just closed it out. They were hitting their 3s.”

As for the men, the Plainzmen, of North and South Dakota, last year’s tournament runners-up, beat You Don’t Want It in the championship game 66-52, closing out the tournament after 10 p.m.

“That was like an intense game from the get-go,” Norman said. “You had to man up in that game or you’d be on the floor. They just went back and forth, back and forth. In the last five minutes or so, the Plainzmen took control, and they closed them out with 3-pointers, three or four in a row of them, and that was it.”

“The MVPs that we gave away this year kind of came from the heart,” Norman said.

The Plainzmen’s Anthony Brown, a friend Randall grew up with, took the award for the men’s division.

“Every time the team tried to make a run, it was him that either got a block or made a rebound or made a basket,” Norman said.

ABC’s RaeAnn West, of Arizona, won the honor for the women’s division.

“She made some tough baskets inside,” Norman said. “She’d rebound for them. Basically, she was their muscle. You could tell.”

On the final day of ball play, the Strictly Business Car Show was held just around the corner at the Hollywood Ball Field, open to the public.

“It’s a good thing to get everybody together and pay tribute to Randall Huggins and the Huggins family,” said Osceola, who used to play basketball with Norman and remembers entering his car in the first memorial Strictly Business Car Show in 2004, where Randall’s car was on display.

Randall’s father and siblings choose the recipient of the Huggins Family Choice Award each year, and this year it went to a souped-up, yellow 2005 Chevy Impala.

“The kids liked it because of the suicide doors and all the TVs and 30-inch rims,” Norman said. “The guy put a lot of money into it…In the car show business, it’s all trying to be unique. We just try to look for something that’s unique.”

Mark Furlong, of Big Cypress, recently updated his Nissan 350Z with a custom-made Panther Clan stencil and 135.7-decibel speakers for the show. Furlong has entered every Strictly Business Car Show and has never lost, he said.

“It’s like playing poker,” he said while waiting for the winners to be announced. “You know you got a good hand.”

Sure enough, Furlong won first place in Import Wild, second place in Euro Mild, and most importantly for him, “bragging rights.”

“[The show] gets bigger and better every year,” he said.

Here’s how Tribal members placed in the car show and SPL sound-off competition: