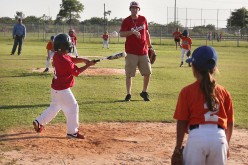 MOORE HAVEN — The season finale was business as usual for the Rangers girls softball team from Brighton Recreation.

Just as they did all season, the Rangers racked up impressive numbers at the plate and dished out outstanding pitching May 6 as they finished with a 14-2 win against the Cubs in the Moore Haven town league for ages 9-12.

“We went undefeated. We ended up 8-0,” Brighton coach Kelly Smiley said. “They did really well.”

Having a pitching staff that rarely allowed runs and an offense that was tough to keep off the base paths proved to be a winning combination this season.

“We scored way more than (our opponents). Our pitching is really awesome and we have really good hitting,” Smiley said.

“They rarely put it in play. Our pitchers do good work,” Smiley said.

The Rangers scored seven runs in each of the first two innings against the Cubs. The game ended after the second inning.