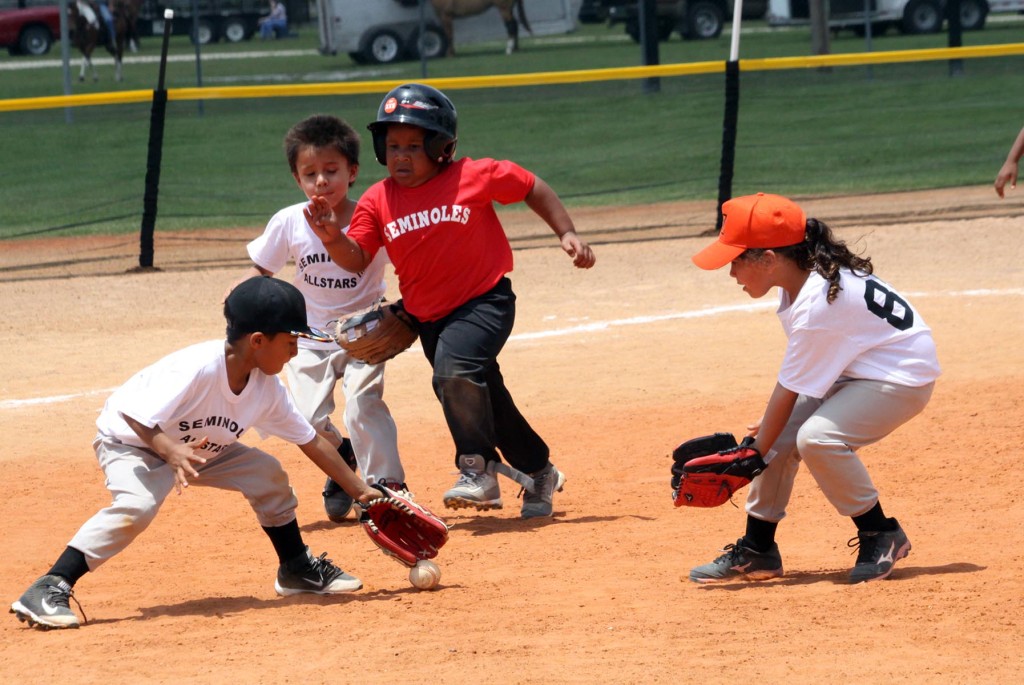 BRIGHTON — Youngsters battled for a trophy that was taller than most of them in the Tribe’s second annual T-ball World Series on the Brighton Reservation.

“It’s as big as me,” exclaimed Quaton (Mater) Billie as she and her teammates from the Brighton White team gazed at the champions’ trophy they won May 10 at Ollie Jones Memorial Park.

Organized by the Seminole Recreation Department, the four-team, double-elimination tournament featured about 55 kids ages 4-7, who belted balls off a tee at home plate, ran the bases, played defense and used their spare time to have additional fun on rock climbing walls and a bungee trampoline activity.

“A lot of kids on this team play on our league teams in Moore Haven. Half of them were coach pitch; a majority of them were T-ballers, so we combined them,” said Brighton White coach Dallas Nunez.

A strong start in the championship game helped Brighton White prevail against a mixture of players from the Big Cypress teams. Brighton White produced a rare feat in T-ball by retiring the side in order in the top of the first inning. Hillowa Garcia, Jordan Johnson, Bryson Smith and Kayden Warrior were among the defensive standouts in the inning.

Brighton White’s TT Anderson provided a spark with a leadoff hit in the bottom of the first. Anderson scored the game’s first run on an RBI single from Miley Jimmie. Quaton (Mater) Billie delivered an RBI double.

Brighton’s defense continued to shine in the second inning, which turned out to be the final inning. Garcia and Warrior combined for a double play.

Players from Big Cypress didn’t depart empty-handed. They received a runners-up trophy, which was only slightly smaller than the champions’ trophy. Individual trophies were awarded to all players in the championship game.