The Orlando Museum of Art’s latest exhibition was curated to highlight Seminole history and culture, but a dance performance April 7 at a special event meant to promote the new addition instead evoked heavy criticism.

The event, a free family fun day, featured numerous interactive performances and showcases to promote the exhibit “Enduring Beauty: Seminole Art and Beauty.” While many elements were successful, including storytelling and flute performances by Hollywood Board Rep. Gordon “Ollie” Wareham, it was a dance and music performance by the group Talako Indian Dancers that resulted in criticism on social media. As depicted in a video shared by Native Opinion on Facebook, the Talako group – a non-profit organization that began in 1986 – performed pow wow-style dances with traditional Seminole clothing. The performance, however, was deemed ‘incorrect’ by numerous Facebook and Twitter users, many even saying that the children performing the dancers were not Native Americans.
The woman who captured the videos pointed out that she did not know whether or not the youth performing the dances were Native or not, but that the performance itself seemed inexperienced and appeared as “silly play times” for non-Native youth.

The woman asked that her name not be used in this article.

“It makes me horribly sad to see these kids with so much heart being misled by ignorant adults,” she posted on Facebook. “My problem is not that they are embracing the culture, my problem is that it is being done with no traditional guidance or traditional education.”

“I’m Seminole, I’m from Florida, I used to live in Orlando and there were so many ways that this could’ve been avoided and/or had Seminole consultation and oversight,” said @TheToniSanchez.
Another user, @Chakenbake, said “… there’s been mixed feelings about it all. It could have been handled better.” 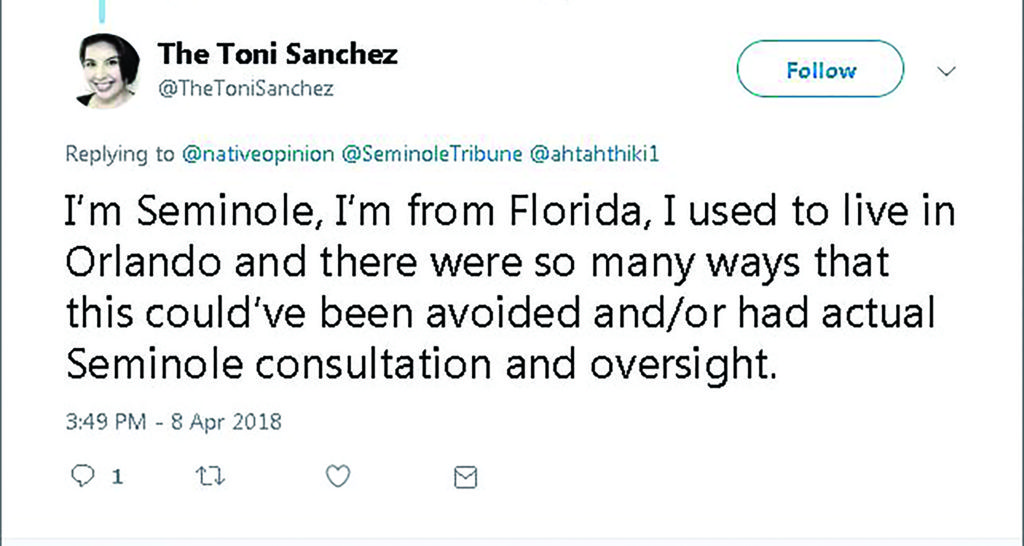 Paul Backhouse, director of the Seminole Tribe’s Ah-Tah-Thi-Ki Museum and Tribal Historic Preservation Office, said that the controversial performance is a “complicated” situation. The Ah-Tah-Thi-Ki Museum reached out to OMA to create the exhibit and affiliated programs, but according to Backhouse, that coordination was not reciprocated.

“We reached out to them several times to try to facilitate that coordination because we were concerned that without Tribal input, something could go awry with how this turned out in its presentation. It just did not work,” Backhouse said. “We couldn’t make the connection we were hoping we would to positively affect the message of this exhibition. It went on display and opened without us having any real input on what it was.”

Although Talako’s website has been unavailable since April 7, a summary of the organization on OrlandoAtPlay.com says that the Talako’s do programs in full Indian dance regalia and that membership is open to all children under 17 years old and does not mention Native American affiliation. The summary provides an Orlando address for the organization.

“What they do is their version of pow wow dances, but they’re really disassociated with the cultures and the meanings of the dances that they’re portraying,” Backhouse said. “When someone in the audience there saw these kids dancing – and this dancing wasn’t of a high standard – and they posted that video and that’s what caused the outrage.”

However, despite the appearance of the children, their performance and the information online, a spokesman for the Orlando Museum of Art told The Tribune in an email that all of the children have Native American heritage. The Tribune reached out to the Talako Group to confirm but had not received a response before publication.

Backhouse emphasized that the troupe’s performance was not the only event of the day and that other components went well. Wareham’s programming, for example, was well-received by guests.
“The museum wasn’t completely insensitive that they hadn’t thought to invite Seminoles,” he explained. “They had; they just made a horrendous blunder in the booking as far as we can tell.”

After receiving significant backlash in the days following the event, the Orlando Museum of Art published the following apology on their Facebook page: 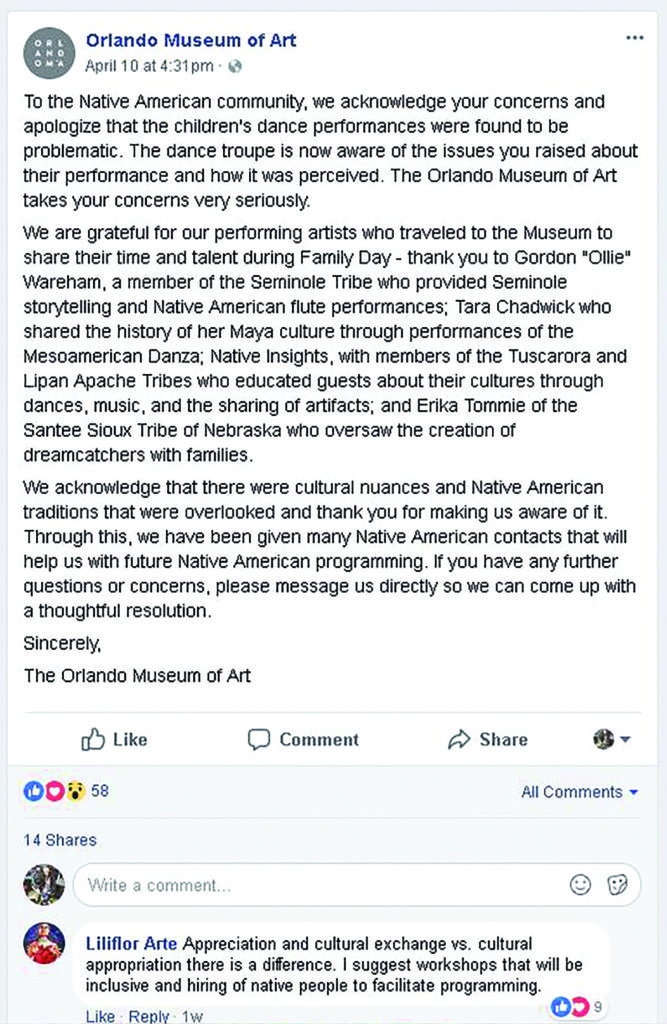 While some accepted OMA’s apology, including one Facebook user who said she’s glad to “see some open discussion” about the problem and is “grateful that good connections between good people have come out of this,” many people did not forgive the museum so easily.

Many Facebook and Twitter users argued that the performance was a blatant display of cultural appropriation and that the museum needs to facilitate more coordination with Native Americans on future programming.

OMA told The Tribune that they are using the situation as a learning experience for future events and happenings at their museum, noting that they had received contacts they plan to work with for future Native American-related programming.

Orlando Museum of Art and the Ah-Tah-Thi-Ki Museum

The controversial performance occurred a week before the Seminole Tribe planned to take a group of Tribal elders to see “Enduring Beauty.” Although Backhouse said the coordinators of the trip struggled with whether they wanted to proceed with the trip, they ultimately decided to leave the decision to the elders.

A group of approximately 50 Tribal elders and members decided to move forward with the trip and visited OMA on April 14 during a closed viewing. OMA closed the museum to other guests and the media while Tribal members were viewing the exhibit. They also provided the group with refreshments. Backhouse described OMA as “very kind and courteous” in regards to making sure Tribal members were respected during their visit, an effort that rectified some prior negative criticisms.

The exhibit itself featured valuable historical objects, including some that the Tribe hasn’t seen since the Seminole Wars in the 1800s. One of the most significant pieces was a sash worn by Seminole Chief John Jumper. Accompanying the display is a photo of Jumper being forcibly relocated to Oklahoma while wearing that same sash. According to Backhouse, the Tribe hasn’t seen that particular item since roughly 1957.

After viewing the exhibit, OMA exhibit curators met with Seminole Tribal members to answer any questions and get feedback on the collection. Tara Backhouse, Ah-Tah-Thi-Ki Collections manager, said that Tribal members pointed out a few errors and misspellings on some of the item labels throughout the exhibit.

“But they’re easy to fix,” she added. “The [Orlando Museum of Art] has been really willing to work with us and correct those things.”

In the email to The Tribune, OMA said they received positive feedback during the visit and was “delighted to hear that some of the visitors recognized family members in the historic photographs.” OMA added that they were honored to be presented with an acorn from the Council Oak as a symbol of friendship between the Seminole Tribe and the museum.

“But then after many attempts to try and get back in touch with them after that conversation, it really fell off the radar,” Macuen said, adding that OMA didn’t get back to the museum until about a month before “Enduring Beauty” opened. “We really feel like there was an opportunity lost to work with them and make it as great as it could be.”

Despite the missed opportunity, Ah-Tah-Thi-Ki’s staff is continuing to find ways to work with OMA. They are currently working to obtain catalogs of all the items in the Seminole exhibit that they can then provide Tribal members. The catalogs list photos and information about each exhibit item.

“I suspect the outcome of this is that we have a better relationship going forward and that they’ll be much more likely to reach out to us in the future if they have a similar exhibition and program,” Paul Backhouse said. “… We’re going to look at developing more opportunities with Tribal members to engage with aspects of culture and history that exist beyond the boundaries of the reservation [in the future].”