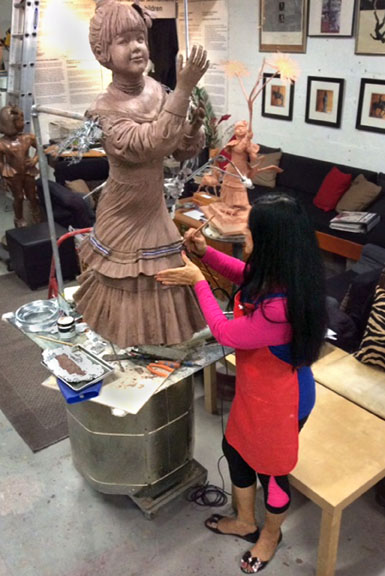 FORT LAUDERDALE — Time is being kind to a long-awaited art sculpture project destined to return a Seminole presence to New River in Fort Lauderdale.

“We’re moving pretty fast, bringing it all together and getting very excited to see it happen,” said Nilda Comas, sculptor of “Florida – A Seminole Girl.”

The larger than life size depiction of a carefree Seminole child, circa 1910, waving a palm frond and skipping playfully with creatures at her feet was transported for casting to the ASU Bronze Foundry in Miami at the end of November.

A grand unveiling ceremony is being planned for Jan. 16.

Comas said the bronzing process will take about six weeks to complete. Meanwhile, 500 tiles depicting Seminole patchwork, drawings by Ahfachkee School students and the names of people who contributed to the project in deeds and donations are being fabricated.

“They are perfect and beautiful and will be installed on the base, which is being made in concrete by the city of Fort Lauderdale,” Comas said.

The statue will be erected on the New River bank directly across from Stranahan House, the historic downtown Fort Lauderdale home of city founders Frank and Ivy Stranahan who befriended the Seminoles – the area’s first true residents.

Fort Lauderdale city commissioners approved placement of the statue on the city-owned property.

Larry Mike Osceola II, a Fort Lauderdale resident who is the first Seminole to serve on the Broward County Historical Commission, and his partner Brian Hill have helped publicize the effort and garner public support.

“The unveiling will be the major event for all of us,” Osceola said. “Personally, I am honored to be part of the recognition of our Tribe. It’s about time. We’ve always been here and we’ll continue to be part of the community and part of the history of Fort Lauderdale.”

Comas, owner of Legacy Art Studio in Fort Lauderdale whose works are prevalent worldwide, said Tribal members are welcome to watch the bronzing. She said the process is historic.

“It’s been done the same way for centuries and most people have never seen it. It’s like kryptonite. It changes from blue to red, then yellow and orange. All of the colors are like wow when the bronze is poured,” Comas said.