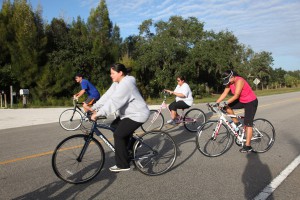 After fitness specialist Kai Setty led a brief stretching session, participants lined up along the entrance of the Brighton First Indian Baptist Church on Rez Road to begin the race.

Gopher took an early lead among the rest of the competitors. Cyclists traveled down Rez Road to the water tower to the first water station, turning onto Harney Pond Road.

At the end of the pavement, past the Red Barn, Seminole Tribe Health Department’s fitness specialist Ignacio Orozco waited with water and beads to pass out and send competitors onto the second leg of the race.

“You got this,” Orozco encouraged the bikers.

Back down Harney Pond Road and a right back onto Rez Road put the cyclists into the homestretch to the finish line at the Brighton Trading Post.

One by one, competitors came in with impressive times.

Gopher, placing first among all and first in her age category, finished with a time of 47:23. Gopher competed even though less than 24 hours later, she would run her first half marathon in St. Petersburg.

Bowers came in right behind Gopher with a time of 52:20.

The other three competitors completed within minutes of each other: Puente with a time of 1:04:58, Huff at 1:08:38 and Smith who made an impressive comeback after switching bikes halfway through the way, finishing with a time of 1:10:40.

The event marked Smith’s first competitive bike race. She recently joined a spin class at the gym and admitted that she decided to compete because she had nothing better to do. She figured she would give it a shot.

Setty announced the times and places and congratulated everyone on a great job.

“I know you came for your health,” Setty said. “And this was about improving your cardiovascular endurance and you all did that.”

Everyone received shirts for their participation and snacked on fruits and granola to regain strength.

“Remember, ‘dead last finish’ is better than ‘did not finish,’ which greatly trumps ‘did not start,’” Setty said.