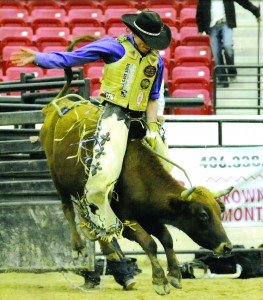 LAS VEGAS, Nev. — Congratulations to the Eastern Indian Rodeo Association (EIRA) 2011qualifers for their performance at the 36th Annual Indian National Finals Rodeo (INFR) competition. They did a terrific job of representing their region at the event held at the South Point Arena in Las Vegas, Nev. from Nov. 8-12.

“The mission of the INFR is to provide, promote and preserve the advancement of professional Indian Rodeo by empowering Native American families, youth and communities,” said INFR President Richard Bowers Jr. “We encourage positive role modeling, educational opportunities, healthy competition and preservation of culture and tradition.”

The INFR commissioners and staff said that it was an honor to award the 2011 champions with gold buckles and saddles that said “World Champion.” This includes the stars and legends that competed in the Junior and Senior Finals.

The INFR currently has 11 regions within the United States and Canada, and its members range from 10 to 80 years old. Champion Native Americans compete against each other in the INFR. There were 59 Tribes represented at the 2010 Finals.

Traveling to Las Vegas, Nev., they were all champions upon their arrival and worked hard to represent their region.

The first few days of competition – known as the Long Go Rodeos – began the process of elimination for the final 10 contestants who would participate in the World Championship during the Short Go on the final day.

Shelby Osceola, 2011 EIRA Ladies Breakaway Champion and Lady’s All Around, took third place in with an impressive average score of 10.2. Shelby’s rodeo career includes high school rodeo as well as collegiate rodeo at Troy University, which she attended with a rodeo scholarship.
EIRA Regional Finals Champion and 24-year-old Leanna Billie, brought home gold buckles in the first and third rounds of the Ladies Breakaway. An outstanding athlete, Billie began her rodeo career in the EIRA junior division and has qualified twice for the INFR.

“I drew a bad calf in my final round,” Billie said. “But that’s rodeo. You don’t always get what you want, and it’s up to you to work it out if you can. Rodeo is an unforgiving sport, and you have to earn what you get. Nobody is going to hand it to you. started barrel racing and roping on the Pro Rodeo circuit, and am looking forward to next year.”

The calf ropers worked hard for their points with Josh Jumper making it all the way to the Short Go. However, his final calf took him out of the running. Ivan BruisedHead drew a mean steer in the second round that ran over him. Slamming its head into his chest, it took him out of the race for the gold.

Regional Finals Barrel Racing Champion Mackenzie Bowers had some great runs that took her all the way to the Short Go. Her final average of 68.539 put her in eighth position for the championship.

The INFR Junior/Senior Rodeos were an opportunity for the EIRA participants to shine. Growing up in the arena, most of these youngsters got their start riding sheep and running the barrels on a lead line. Years of hard work won them a slot at the Finals, and they put their hearts into the job at hand.

The 2011 EIRA Boy’s All Around and Junior Breakaway Roping Champion, Jobe Johns, made it through all three rounds of the Junior Steer Riding and averaged eighth in the nation in the final count.

Fourteen-year-old Kelton Smedley has been riding rough stock since he was old enough to climb on a sheep. As this year’s Junior EIRA Bull Riding Champion, he has expanded his field by competing in the Southern Pro Bull Riding Association and on the Christian Rodeo Circuit.

“The points in Bull Riding are based on the performance of the rider and the bull,” Smedley said. “Unfortunately, I drew one that didn’t want to do his job and left me with a poor score. But that’s the luck of the draw and I’m already looking forward to next year.”

Competing against the best of the best in the Junior Breakaway, three of the Tribe’s outstanding young athletes were counted in the national top 10. Blevyns Jumper ranked third, Andre Jumper took fifth and Jobe Johns earned sixth.

It proved to be a tough barrel pattern for Kalgary Johns, Dayra Koenes and Budha Jumper running in their respective divisions, but it didn’t damper their spirits.
“I was thrilled to have the chance to participate at the INFR,” Dayra Koenes said. “The best part was meeting so many other young Native Americans who share the same interests and enjoying the company of my friends. I can’t wait to get home and start preparing for the next season.”

With 30 contestants vying for the World Championship in each of the major events, Tour Rodeos have become an important part of the qualifying process. The Tour Rodeos hosted by the EIRA in 2011 have been recognized by the INFR as two of their major events of the year. Many of this year’s World Champions traveled across the country to earn their qualifying points in the Big Cypress and Brighton arenas.