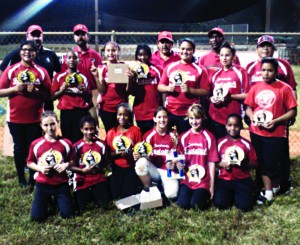 HOLLYWOOD — The girls “12 and under” Seminole Fastpitch Softball Team recently won the county recreation softball championship in a close and exciting game against The Sting from Silver Lakes, Fla.

Although at one point the Seminoles were down 2-5, they tied up the game and won by one point in extra innings. Tribal member Kiauna Martin hit the winning run.

There are eight Tribal members on the team. Coach Moses Jumper said that although every team member contributed to the win, Tribal member Claireese Billie “carried the team in her hitting.” He said, “She’s probably one of our most improved players.” Dasani Frye also made some memorable plays. “Dasani was one of our top pitchers and also played first base and did a good job hitting,” he said.

Annie Jumper was a notable player as well. “Annie did an outstanding job catching and hitting,” Jumper added.

The team posted a 12-3 record throughout the season and qualified for the 9-team playoffs in which they went undefeated.

The team is coached by Moses Jumper, Ruggy Jumper, Joe Collins and Ron Ward. Moses Jumper said that they have played together for two years. He said he hopes they can return to the Native American Youth Organization (NAYO) softball tournament in Mississippi in the future. The winter season will begin in January, and all Tribal girls are invited to come out for the team.
For more information, contact Joe Collins at the Seminole gym in Hollywood or Ruggy Jumper at the Hollywood Tribal office.