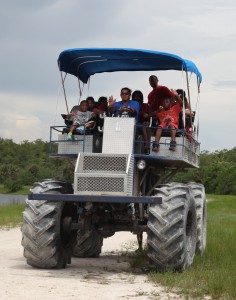 BIG CYPRESS — For kids, summer is all about having fun. No homework, no tests, no sitting still in a classroom for long hours at a time. Going to camp is about going outside, being active and having a good time trying new and exciting activities.
A group of about 35 Big Cypress kids spent July 10 at the Recreation Department’s summer camp fishing, playing billiards and enjoying swamp buggy rides.

“This is the first year of the summer camp,” said Josh Jumper, Herman L. Osceola Gymnasium site manager. “We start every day with a fitness class, and then we do sports, swimming, video game tournaments, billiards, wildlife programs and field trips off the reservation. The response so far has been great.”

The camp teams up with the Boys & Girls Club twice a week for activities and once a week for a fun-filled pool party. The combined camp went fishing at the spillway on Boundary Road and honed their skills with fishing poles, as well as with traditional gigs.

The gig, a long spear with multiple sharp prongs at the end, is used to spear gar and other fish in shallow waters. Wildlife Department director Randall Osceola helped teach the campers how to use a gig.

The fish were biting at the campers’ hooks as they cast their lines off the bridge over the spillway.

“It isn’t the biggest fish I ever caught, but it is the biggest anyone caught today,” said Elisah Billie as he prepared to throw his sixth catch of the day back into the water.

During the activities, kids have the opportunity to learn new skills.

“The kids get to explore the reservation with knowledgeable [Tribal] members,” said Thommy Doud, Big Cypress Boys & Girls Club manager. “We are fortunate the Wildlife Department takes them out here. It’s a great resource we have.”

Big Cypress Recreation coordinator Kelvin Robinson said the response to the camp has been great – they get more and more campers every day.

“Some kids are gamers who only like to play video games and don’t really like sports, but they all enjoy the activities with the Wildlife Department,” he said. “To see them enjoying the outdoors is very gratifying.”