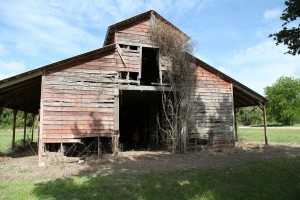 BRIGHTON — In the upcoming weeks, construction crews will begin working at the Red Barn site to initiate a long-overdue stabilization process. Although the Red Barn – originally built in 1941 – has withstood many storms during the past 70 years and was even used as a hurricane shelter, the structure now shows many signs of age. Planned structural improvements will guarantee its survivability for years to come.

The Capital Improvements Plan, funded by the Tribal Council, is responsible for the administration and oversight of all capital improvements and will support the repair.

While a 2005 roof replacement helped add stability to the structure, the overall building condition is still declining at a rapid rate. As one of the oldest standing structures on the Brighton Reservation and a highly significant historic site for the Seminole Tribe of Florida, it is important to make the building as stable as possible to preserve the memory of the Red Barn, which symbolizes the roots of the modern-day Seminole cattle industry and the beginning of organized Tribal government.

The Tribal Historic Preservation Office (THPO) hired a professional structural engineer to assess the condition of the building in 2010. TRC Worldwide Engineering Inc. concluded that the building’s poor condition requires stabilization as soon as possible. The east and west walls of the barn show the most damage because of age, weather and insect damage. TRC recommended that, in order for the building to be structurally stable, they need to repair the damaged wood, replace footers and foundation as needed, and replace the roof support posts.

TRC received estimates for the job from area contractors with experience working with historic buildings. Since the Red Barn is listed in the National Register of Historic Places, all repairs must be in accordance with the U. S. Secretary of the Interior’s Standards for Historic Preservation to ensure repairs do not disturb the building’s historic character. Building stabilization must be complete before any further preservation activities can be conducted.

This first phase of the Red Barn Preservation Project is planned to be finished by Oct. 6 in time for the Red Barn Dance celebration. Open to the general public from 1 p.m. to sunset, the event will feature a cattle drive conducted by the Seminole Cattlewomen’s Association, the unveiling of both a roadside historical marker and a National Register of Historic Places plaque, a barbecue dinner, the raffle of a Red Barn painting by Dorothy Gardiner, the showing of a Seminole Cattle Heritage documentary and live Western swing music from Larry Mangum and the Cowboy Orchestra.

At that time, the THPO staff will seek input regarding the future of the site, featuring a display of various idea sketches by famed Hard Rock International director of design Rob Schaeffer.