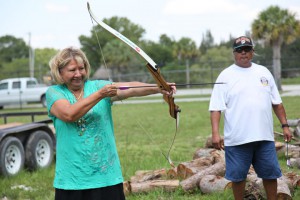 BIG CYPRESS — It was game on for the Big Cypress seniors at Culture Day on May 30.

About 15 seniors came out for some friendly competition under the blazing sun behind the Big Cypress Senior Center.

The morning began with a pan toss, a game that Big Cypress coordinator Nadine Bowers came up with.

Former Chairman Mitchell Cypress joked that the women had the advantage in the game because they handle cookware more often than men do.

But when it came to the archery competition, it was his time to shine.

After four rounds of shooting, Cypress hit two bull’s eyes and racked in 365 points, taking the championship for the men. He said he plans to use his prize money to buy himself a bow and arrow. He was followed by Tommy Watts Billie and Rudy Osceola. For the women, Minnie Tigertail’s straight shot gave her 295 points and a first-place win, while Lucille Jumper and Virginia Mitchell scored second and third, respectively.

As the games wrapped up, the seniors followed their appetites into the Senior Center for a lunch of fried pork and chicken, soup, flatbread, boiled squash and broccoli salad. While they finished their meals, the raffle winners were announced. Prizes included a folding chair and a camouflage lunch box.

The festivities ended with a classic game of bingo.

Culture Day is held four times a year to bring the seniors together for some outdoor fun.