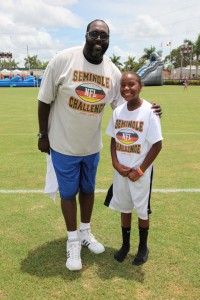 HOLLYWOOD — Hollywood Tribal youth John Osceola, 12, didn’t know much about football, but he showed up at the Hollywood Ball Field on June 2 ready to learn during the Tribe’s NFL Experience Day.

“I want to feel the experience of what it’s like to be an NFL star,” he said, catching his breath just moments after doing a drill with former NFL running back Lorenzo White.

Osceola was one of several Tribal members who came out to meet a handful of former NFL players and to learn a thing or two about football.

Hollywood Councilman Marcellus W. Osceola Jr. and Board Rep. Chris Osceola sponsored the event, which was open to the entire Tribal community. It was the third in a series of Family Fun Days aimed to keep the community active.

“It’s something different to do,” he said sporting a Miami Dolphins T-shirt. “Some of these guys are definitely role models of mine, so they’re probably role models for [the youth].”

Among others, Councilman Osceola had the opportunity to meet someone he admired growing up – former NFL defensive end Jeff Cross, who played for the Miami Dolphins in the late ‘80s to mid-‘90s and played in the Pro Bowl in 1990.

The former NFL players spent the day coaching participants through several drills, including punting, passing, kicking, throwing at a moving target, maneuvering through an obstacle course and running a 40-yard dash.

The dash was Hollywood Tribal member Neko Osceola’s favorite exercise. Currently the running back for American Heritage, he hopes to play for the Miami Hurricanes and the Philadelphia Eagles one day.

The professional athletes came out in connection with the Lorenzo White Foundation, which was established in 2010 to support youth programs.

“It helps get kids off the street and keep them in school,” said White, who played for the Houston Oilers for six years and played his final year with the Cleveland Browns in 1995.

Former NFL guard William Roberts also came out to support the Tribe’s youth. Roberts, who played in three Super Bowls and a Pro Bowl during his time with the New York Giants from 1984-1994, said some of the kids never picked up a football before, so teaching them was rewarding.

“It’s good because you can see the development within a few seconds,” said Roberts, who finished his NFL career playing for the New England Patriots and the New York Jets. “It’s refreshing because I know over the years I played football it took me awhile to develop this craft.”

Former NFL running back Mark Higgs and former NFL wide receiver Bernard Ford were also on site running drills. Ford played for the Dallas Cowboys in 1989 and the Houston Oilers in 1990. Higgs played for the Dallas Cowboys, Philadelphia Eagles, Miami Dolphins and Arizona Cardinals during his NFL career from 1988-1995. He was one of three Dolphins players to lead the Dolphins in rushing for three consecutive seasons, from 1991-1993.

“The vision is to give back to the community and to support the children in the community,” Lorenzo White Foundation co-founder Robin West said. “(We want to) reach those kids and give them a taste of some of the values that come with [football]: team work, competition, pride and accomplishment and goal setting.”

In between drills, the kids cooled off at the snow cone stand and played on water slides and bounce houses around the field. A barbecue lunch was also served.

“It keeps [kids] off the street and gives them something to do,” said Amanda Howell, who arrived with her brother and his girlfriend and kids.