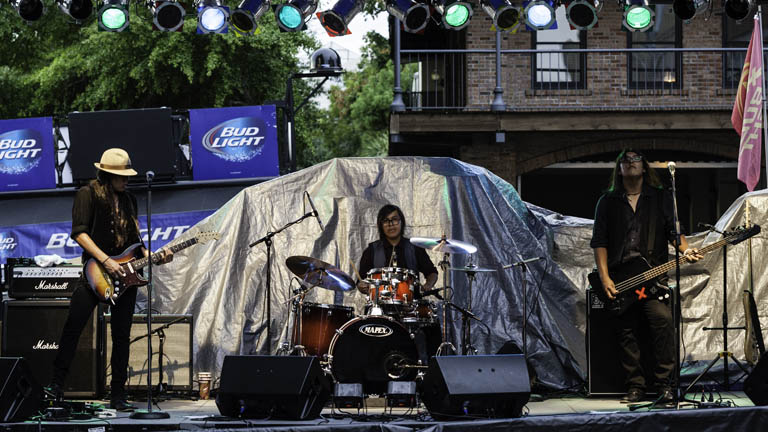 TALLAHASSEE — The night before the Florida State University football team dominated on the field in its home opener, Seminole brothers commanded the stage at the Friday Night Block Party.

The Osceola Brothers Band rocked the streets for thousands of spectators Sept. 5 at Kleman Plaza in downtown Tallahassee, where they opened for country artist Drake White.

“What better way to kick off the defending champion’s first home game than with a Seminole band,” said Norman “Skeeter” Bowers, who helped arrange for the band’s appearance. “They brought it and by the end of the show, the crowd didn’t want them to go.”

The street party, held the night before every home game, is a Tallahassee tradition. For the last five years, major national acts such as Florida Georgia Line, Jake Owen, Tyler Farr and Parmalee have appeared on the stage.

“We’ve become this niche of getting people right before they become huge stars,” said Jason Dennard, FSU assistant athletics director of marketing and promotions. “We were very pleased with the Osceola brothers. I think they are very talented, and we could definitely have them back again.”

The idea for the Tallahassee performance was hatched when FSU brought the championship trophy to the Seminole Hard Rock Hotel & Casino Hollywood in May. Bowers invited the school’s president, athletic director, football players and cheerleaders to Hollywood and made sure they saw the Osceola Brothers Band perform.

“They liked what they saw,” Bowers said.

Cameron, 17, Tyson, 16, and Sheldon, 13, are accustomed to playing gigs far from home. The band performed at the Comanche Nation Tourist Center Summer Fest in Oklahoma in July and were thrilled to play in Tallahassee for the first time.

“They made us feel welcome,” Sheldon said. “It was awesome and exciting.”

The band thrived playing in front of a few thousand people.

“People came to see us and gave us their undivided attention,” Cameron said. “It was a younger crowd and more hyped and energetic. A better crowd makes the performance better. The crowd is an important part of the show. You give and they give you something back.”

Bowers has been a fan of the band for several years and has watched them continue to improve.

“Cameron is a little wizard on the guitar,” said Bowers, the Chairman’s special assistant. “It makes me proud, and as a Tribe, we should be proud of them. They are very good boys. They are the utmost of what you would want to represent your Tribe.”

“The drum major had to wait for Cameron to stop jamming,” Bowers said. “The crowd went crazy. When he stopped, the FSU band kicked right in. It was amazing.”

The following day, with Doak Campbell Stadium filled to capacity, the Osceola brothers went onto the field with Osceola and Renegade.

“I thought, ‘One day I’ll sell out a stadium like this,’” Cameron said. “I’d love to play for a whole lot of people.”

Until that day, the Osceola Brothers Band will continue to play local and out-of-town gigs.

“I promise they will be coming to Brighton real soon,” Bowers said.