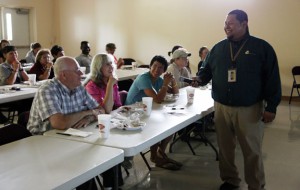 BIG CYPRESS — Music has entertained, connected and educated people for ages, and the Seminole Tribe has their own place in that legacy. As the Unconquered people, the Seminoles have fought to endure through wars and conflicts, and music has helped preserve their culture and history.

Community outreach specialists Everett Osceola and Van Samuels joined forces to teach the Tribal community about the evolution of music on June 6 at the Big Cypress Community Center.

“Music is a very important part of Native culture, and Seminoles are no exception to that rule,” Osceola said while more than 40 participants listened.

“I came to just listen and learn the culture of the Seminole Indians,” he said. “I think it’s cool that they keep their traditional ways to a certain extent.”

The presentation began with a video of Seminole Stomp Dancers. Osceola explained that the men chanted while the women kept the beat, working together while moving in formation to carry out the dance, which has both religious and social significance.

“This is sort of like the early forms of Seminole music,” Osceola said.

Then, during the 1800s, the U.S. government started sending Native American children to boarding schools where they were forced to “assimilate” by abandoning their customs, including their language; but the Seminoles preserved their culture through music. Despite the government’s threats, some Indians dared to keep their native tongues – Mikasuki and Creek – in the worship music at the newly introduced Christian churches.

“They’ve taken many things from the Indian people, but one of those things that the U.S. government has never been able to take away is the culture and the music,” Samuels said.

During the Seminole Moments presentation, Osceola and Samuels showed the lyrics to a couple worship songs in Creek.

Rev. Arlen J. Payne and his wife, Lana, of the Big Cypress New Testament Baptist Church, volunteered to sing the hymn Alleluia for the crowd.

The next video played showed Chairman James E. Billie performing Sawgrass Flower at a luau in Big Cypress in 1989, switching between English and Mikasuki throughout the song. Chairman Billie helped pass on the language through his music and was at the forefront of contemporary Seminole music, Osceola said.

Osceola recalled the Chairman visiting his preschool to sing to his class and then asking students to sing The Counting Song back to him.

“I remember listening to that song until I wore [the cassette tape] out,” Osceola said, adding that music is one way the ancient language is learned and kept alive.

“They try to incorporate the language back into the music,” Osceola said, adding that they also sing about the history.

They used the hip-hop music video The Storm by the Battiest brothers as an example.

“The songs, the music, that’s one thing that’s endured throughout history,” Samuels said.