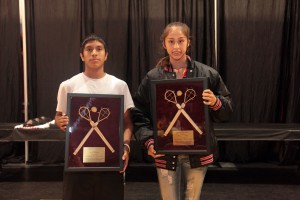 BIG CYPRESS — With the end of the school year comes the end of the sports season. Ahfachkee School celebrated the Warrior and Lady Warrior student athletes with a sports banquet on May 16, complete with awards and accolades.

Awards and certificates were piled high on a table near the stage and flower arrangements decorated the dining tables at the Herman L. Osceola Gymnasium, which looked more like a banquet hall than a gym. Each team member received a certificate of participation, top athletes received recognition for their efforts with letter jackets and nine scholar athletes received recognition for their achievements in the classroom as well as in the sports arena.

Devan Bowers and Dasani Cypress were awarded Warrior and Lady Warrior of the Year.

Keynote speaker J. Webb Horton, assistant director of Community Outreach at Florida Gulf Coast University, congratulated students for their hard work and parents for the sacrifices they made for their children. Although Ahfachkee didn’t have the winning records in their sports, Horton acknowledged the importance of showing up.

“The record doesn’t matter – competing does,” he said. “Don’t worry about wins and losses; the main thing is how you compete.”

Awards were presented in volleyball, golf, basketball and softball. Coaches talked about the athletes and remarked on the progress of their teams over the course of the season.

“It was a beginning year and one of learning,” said volleyball coach Bernadette Schyvinch. “The team grew stronger, and by the end of the season, they were working together. I congratulate them for their effort, persistence and never giving up.”

Golf instructor Amos Mazzant was impressed by the success of the team and had good things to say about each player. Two of the players, Dasani Cypress and Quenton Cypress will compete in the Jim Thorpe games in Oklahoma next month.

“The team had only one returning player; the other five had never played before,” he said. “Golf is a gentleman’s game; it builds character. The team improved dramatically over the season. They took 30 points off their score. I’ve never seen so much talent.”

“I saw these girls come together as a family,” she said. “I’m very proud of this team and look forward to more successful years to come.”

The boys’ coach was equally effusive with his praise.

“This was a learning year for us and we had tough games,” said coach Cicero Osceola. “But the team didn’t give up and they played hard. It didn’t matter what the score was, they battled hard. It was a great season because we were out there playing hard.”

It was softball coach Danny Tommie’s first time coaching girls and it surprised him a bit.

“When you coach a bunch of young ladies, you learn something every day,” he said. “They are good at what they do. It was a tough season, but they pulled it together. In spite of the adversity, they did a good job, stuck with it and with each game they got better and better. The dedication and responsibility you have here will stay with you for life.”

Warrior of the Year Devan Bowers, 15, has played sports his entire life. Basketball is his favorite, but he also enjoys football.

“I was surprised to get the Warrior of the Year,” he said. “I’m kind of glad I got it; I made my parents proud.”

Lady Warrior of the Year Dasani Cypress, 13, was also proud of her accomplishment.

“I feel all my hard work paid off,” she said. “I never thought that what my dad said – if you keep working on it, it will pay off – was true, but it was. I was surprised once I listened to my parents; it worked in the long run. I’m glad I listened.”