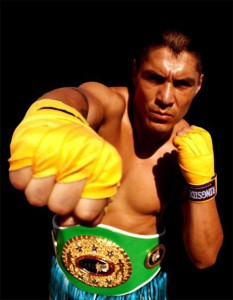 A middleweight with a 31-1-1 record, Tahdooahnippah has been a pro boxer for 10 years. Since he began boxing, he has been featured on ESPN2’s “Friday Night Fights,” won the World Boxing Council Continental America’s middleweight title and won fights with 23 knockouts. After each win, Tahdooahnippah celebrates with his own Comanche victory dance.

“Sports always kept me grounded,” said Tahdooahnippah, a member of the Comanche Tribe. “I had so many challenges and obstacles in my way, but my dad stayed on me to get my education and be the best in the class.”

Tahdooahnippah wasn’t always sure what he wanted to do, so he began as a wrestler in school. It eventually led him to a full scholarship at Delaware State University. He also competed in amateur kickboxing and dominated the light heavyweight division in the Oklahoma Original Toughman Contest. After that, he found his calling in the boxing ring, where he was a natural. He won his first professional fight with a technical knockout in the first round. He remained undefeated until recently, but he is still a highly ranked contender.

Tahdooahnippah said the hardest part of being a boxer is the training.

Tahdooahnippah lives in Lawton, Okla. with his wife and four children. He strongly believes people should always strive to achieve their dreams.

“I have always chased my dream; I’m still doing that now,” he said. “I’m trying to get a world title.”