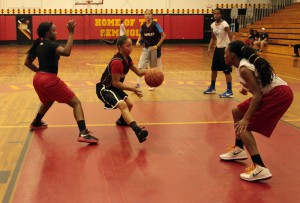 HOLLYWOOD — To get ahead, it’s not always what you know but who you know. For youth who want to play basketball in college, finding a way to showcase their skills on the court to coaches can be a challenge. But Seminole youth got the advantage by participating in the Basketball College Exposure Camp at the Hollywood Gym April 20 and 27.

The student athletes played real games which were videotaped. The tapes will be distributed to National Collegiate Athletic Association coaches at junior colleges, Division II and Division III colleges and universities.

“This is the first time the Tribe has done this,” said Richard Blankenship, director of Recreation. “People spend a lot of money getting this information to the colleges; this is how kids get seen. It’s very uncommon for kids to be signed by a college without this process.”

Toccara Williams, of the Sweet Rebound basketball program, ran the camps for boys and girls. A former college player for Texas A&M University, she will send the tapes to a large network of coaches around the country.

“The goal is to get them out to as many coaches as possible so they can see what the kids can add to their programs,” Williams said. “The unique thing is these athletes’ educations are paid for, which is a good selling point because schools have limited scholarship money to spend. It’s like gold to the coaches who won’t have to use those funds.”

Shoni and Jude Schimmel, sisters and basketball stars who played for Louisville in the NCAA Championship series this year, brought a lot of attention to “rez ball” and Native American players.

“They are on the radar now,” Williams said. “Rez ball is a different type of game and most people don’t know about all the tournaments on the reservations. A lot of coaches are doing more research on Native American players, and I think this will be very good for them.”

Coaches like to see how athletes play throughout a game, so Williams will send unedited video footage. Six girls and nine boys played in the two exposure camps, and Sweet Rebound brought pickup players to increase numbers and competition.

“It motivates me to keep doing it and pushing myself to practice more so I’ll be prepared,” said Darlah Cypress, 15, a 10th-grader at Ahfachkee. “I want to play in college.”

“I’m looking for a college career and hope to get one,” added Shae Pierce, 14, a ninth-grader at Okeechobee High School.

The students realize the difficulties of getting in front of college-level coaches and appreciated the exposure.

Robyn Swaby, assistant coach at Johnson & Wales University in Miami, said she was impressed with the girls’ game.

“I’m looking for a lot of hustle and understanding of the fundamentals,” she said. “We are guard heavy, so we are looking for post players and centers. These players are young, but I was impressed.”

“You have to be a student athlete, not an athlete who is a student,” Williams said. “Homework is important; a champion is made when no one’s looking. It looks easy on the court, but no one knows what goes on behind closed doors when you are working late into the night to do schoolwork.”

Still, the kids were glad to have coaches see them play the game they love.

“It’s the perfect opportunity to get recognized and looked at by coaches,” said Aaron Alvarado, 17, an 11th-grader at Immokalee High School who wants to go to FSU. “I want to get my education, but I always wanted to play basketball in college.”