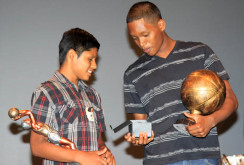 BRIGHTON — The hands of Camryn Thomas are often occupied with sports equipment, whether a glove, ball or bat, but when the eighth-grader departed from the Brighton Veteran’s Building, awards filled her hands.

The memories outweighed the awards for Thomas, who will attend Lake Placid High School this fall.

“It’s overwhelming because I’m leaving,” said Thomas, who received Seminole awards in basketball and softball for demonstrating great character and leadership. She also won the Most Improved award in volleyball and was honored as a three-year letter winner.

On the school’s academic side, she was recognized as the only three-year scholar athlete.

When softball coach Nancy Jimmie looked for a player to lead the team this past season, her eyes focused on Thomas.

“I wanted her to carry the team for me and show everybody how actual teammates should be,” Jimmie told the audience. “She has a great attitude. She’s the kind of person I wanted everybody on the team to be.”

Boys basketball standout Richard Harris, who will attend Okeechobee High School, also went home with plenty of hardware after being named the team’s Most Valuable Player and Defensive Player of the Year. The trophy for the latter was in the form of a bronzed regulation-size basketball.

“It’s pretty big. It’s going in the trophy case at home,” said Harris, an eighth-grader whose final season at PECS proved memorable for leading the squad in blocks, rebounds, scoring and steals.

“He was our leader in the locker room as well,” said boys basketball coach Kevin Jackson, who described his small forward as “a very special player athletically, very gifted.”

Harris, Thomas and classmate Sunni Bearden were recognized for being three-year letter winners. The honors were handed out by athletic director Darryl Allen.

“I wanted to present it to them and let them know how much we appreciate what they’ve done in our program,” Allen said.

Bearden’s excellence on defense didn’t go unnoticed, as she captured Defensive Player of the Year awards in volleyball and basketball.

“Considering we only had like 12 games, that’s quite a bit of aces,” said volleyball coach Kim Jackson. “She works very hard and doesn’t get the credit she deserves a lot of the time.”

Raeley Matthews was a double award winner in volleyball. She was named MVP and Offensive Player of the Year thanks in part to her team-high 62 kills. Jackson said Matthews “made a huge impact on our team.”

“One match, her mom told her that if she didn’t get 10 kills in the game, she wasn’t going to take her to McDonald’s. Guess who got 10 kills that game?” Jackson said.

In addition to an outstanding season on the court, Matthews was recognized for her success in the classroom throughout the academic year. She received the school’s top academic excellence award for female student-athletes with a 3.8 GPA. Kaleb Doctor won the award on the boys side with an impressive 4.0.

Finding opponents their own age has been a challenge for PECS teams because middle schools with sports are somewhat rare. Therefore, PECS sometimes faces high school teams.

“I’m very proud of our athletic programs and the seasons they’ve had, especially doing so well against so many teams that are much older than us,” principal Brian Greseth said. “Many of our sixth-, seventh- and eighth-graders are playing against ninth-, 10th- and 11th-graders, and they do well.”