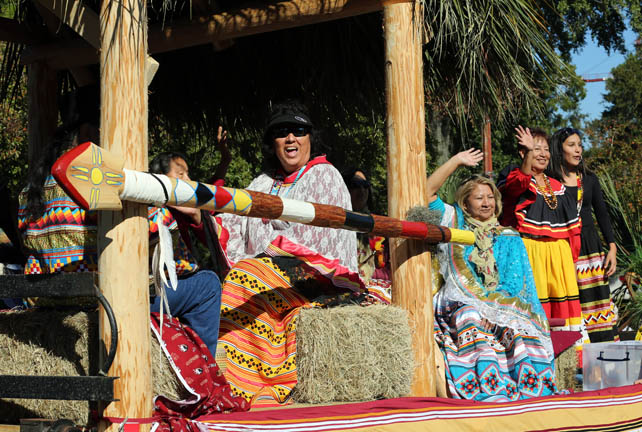 The spectacle of FSU’s iconic Osceola riding Renegade onto the field fired up the crowd, paying homage to this year’s homecoming theme “Fueling the Flame.”

Osceola threw his flaming spear into the 50-yard line of Bobby Bowden Field to start the game, and the crowd erupted. Seminole fans had plenty of reasons to cheer throughout the evening as FSU topped Virginia, 34-20.

Two new traditions may have been born this year at FSU: Tribal seniors as part of the homecoming parade and a Tribal member on the team roster.

The Immokalee and Big Cypress seniors had such a good time as participants in the homecoming parade they want to return next year, said Angie Arreguin, elder services activities coordinator.

The float featured a 6-by-6-foot chickee, which was built Nov. 6 in Tallahassee the day before the parade.

“Everyone was so nice. You could tell they accepted us as real Seminoles,” Nancy Motlow said. “It was an amazing experience.”

Tribal member and FSU freshman wide receiver Justin Motlow, who is redshirting this season, didn’t play, but he cheered on his teammates from the sidelines as the Seminoles stretched their winning streak to 25. After a victory against Miami the following week, undefeated FSU reclaimed the top spot in the Associated Press and coaches polls.

The Nunez princesses, Little Miss Seminole Madasyn Osceola and Little Mr. Seminole Roberto Benard were invited to attend events throughout homecoming week, including a parade luncheon at the alumni center, the pow-wow pep rally at the Civic Center, the alumni association’s homecoming awards breakfast, the alumni tailgate party in the president’s backyard and the big game itself.

When they weren’t on the field waving to the crowd or fulfilling their duties with FSU royalty, the princesses and Little Mr. Seminole greeted guests and posed for pictures in the president’s suite at the stadium.

“Homecoming is the highlight of every princess’s year,” said Wanda Bowers, chairwoman of the Princess Committee. “They all did really well.”

During events, Seminole royalty represented the Tribe, charmed attendees and reveled in the festive homecoming atmosphere. It felt like a second home to Cheyenne.

“It was cool because I felt so loved – everybody wanted me to be there,” she said. “It was an honor to meet the president and the homecoming court. Walking on the field for the crowning ceremony was great. I learned so much about Florida State; now I really want to go there.”

Newly installed FSU president John Thrasher met the princesses and Tribal members and said he looks forward to continuing the school’s long-standing relationship with the Tribe.

“We cherish and honor the relationship with the Seminoles and I will do everything to sustain it,” Thrasher said. “I plan to meet with Tribal leaders and ask them if there is anything they want. I would love to increase the Seminole student population. To sustain our relationship in a positive way is beneficial to the Seminole Tribe and to FSU.”

The relationship has endured since 1947 when the school chose Seminoles for the teams’ nickname.

“They love us,” Bowers said. “We’re just as proud of FSU as they are of us and being able to use our name.”