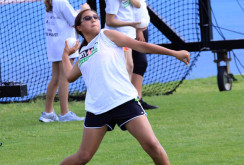 Gopher’s extra effort paid off in the dramatic final strides of the boys 400-meter race in the 11-12 age group. Starting from the outside in lane six, Gopher, who wore sky-blue Nike Force sneakers, led early.  However, as he neared the finish line, he was in second place. With one final gasp he stuck out his chest in his last stride. It was a photo finish for first, although such technology wasn’t used for the event. After a few minutes of conferring, officials deemed the race finished in a tie, as both Gopher and another runner crossed in 1 minute, 9 seconds.

Just a few minutes prior to the 400, Gopher ran the 100. He didn’t place in the top three. He said afterward that he prefers to run longer distances compared to sprints.

Gopher’s victory capped an impressive day for PECS, which also received wins from Raeley Matthews and Julia Smith in the softball throw. Eight PECS students ages 9 to 14 were among the 300 athletes at states, which only featured winners and runners-up from district meets held in May.

PECS’ state winners will have to wait and see if they are invited to compete in Hershey’s North American finals Aug. 2 in Hershey, Pa. Their winning numbers will be matched against winners from eight other states in the Southeast before officials decide who will compete in Chocolatetown. Selections are expected to be known in early July.

If Matthews is selected, it will be a return trip to nationals where she finished runner-up a few years ago in the softball throw.

The farthest of Matthews’ three throws in Miramar soared 164 feet, 10 inches – or nearly 55 yards – on Ansin’s soccer/football field. Matthews’ winning margin in the 13-14 girls division was a comfortable 17 feet in front of the runner-up. After she notched the victory, Matthews competed in the 200-meter run, where she finished seventh.

With four events on her menu, Smith was PECS’ busiest athlete. The shortstop on the school’s softball team showed that the strength of her arm can reach well beyond an infield. Her winning throw covered 138 feet in the 11-12 girls division. On the track, she finished third in the 400, fourth in the 100 and teamed up with Jenna Brown, Aubrey Pearce and Diana Rivera to finish third in the 4×100 relay. Rivera was a substitute for Janessa Nunez, who was unable to attend the meet.

In addition to the victories, PECS students churned out other solid results. Ysla Meras finished second in the 9-10 girls softball throw with a throw of 83 feet, 5 inches. Donovan Harris heaved the softball 161 feet, good enough for runner-up in the 11-12 boys division. Chandler Pearce was the only PECS student who qualified for states in the standing long jump. His leap of 8 feet placed him fourth in the 13-14 boys division.