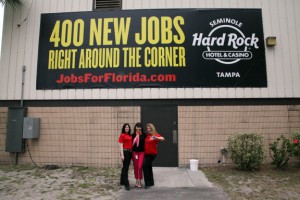 TAMPA — The first job seeker showed up at 2:30 a.m. First in line at the appointed State Fairgrounds exhibition hall, early bird Yvette Dube was followed by more than a thousand others hoping to successfully apply for more than 400 available jobs at the nearby Seminole Hard Rock Hotel & Casino.

In fact, so many people showed up on April 16 that Hard Rock officials unlocked the vast hall’s front doors early, then began sending people away by 10 a.m.

“We could only process 1,000 people in one day. That was our plan. It was very exciting,” said Tampa Hard Rock public relations manager Gina Morales. More than 3,000 people registered early to fill 400 positions, including chefs, bartenders, servers, cashiers, technicians and “openings in every department.”

The new hires are necessary to support a $75 million expansion to the Hard Rock complex, the second of three expansions in the casino’s master plan. Increasing its work force to 3,500, the expanded Tampa Hard Rock will open in June as one of the 10 largest casinos in the country, with 220,000 square feet of casino floor space for 5,000 slot machines and 105 gaming tables. More than 1,300 parking spaces are also being added.

On day one of the job fair, 185 people were hired, including first-in-line Dube, who said, “My persistency paid off. I’m now a productive member of society. I am employable.” That’s no small accomplishment in Florida, where unemployment sits at 9.4 percent.

Those who didn’t make it through the door on April 16 were asked to return during the next few days until all 400 jobs were taken.

“This isn’t 50 different companies with tables and displays and stacks of application,” she said. “We are interviewing, testing and giving out real jobs for one of the best companies to work for in the world.”

Claire Petion could not hide her big smile as she ended her five hours of interviews and waiting with the prize she sought: a job as a pastry chef working for famed Chef Alon Gontowski, who was crowned the winner of Food Network’s Sweet Genius TV show last month.

“I have wanted to work for Hard Rock ever since I got out of culinary school in 2006,” Petion said. “And to work with Chef Alon – how great is that?”

Hard Rock’s Thompson said that, on the average, she gets a dozen inquiries about pastry chef jobs every week, as well applications for many other positions.

“There are so many highly qualified applicants,” Morales said. “And most of them have always wanted to be a part of the Hard Rock family. “